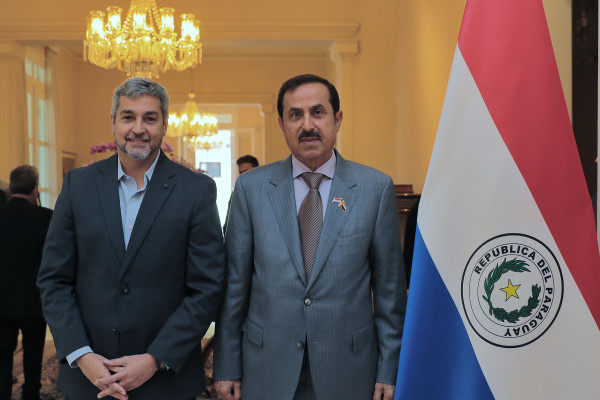 At the start of the meeting, Benítez welcomed the visit of Ghobash and his delegation, stressing the visit’s importance to the mutual ties between the two countries. He also highlighted the key role of parliaments in strengthening the relations between the two friendly countries, and commended the UAE’s support for Paraguay’s medical sector during the COVID-19 pandemic.

The meeting, which was attended by Saeed Abdullah Saif Al Qamzi, UAE Non-Resident Ambassador to Paraguay, discussed ways of strengthening the cooperation between the UAE and Paraguay, and the two sides also addressed regional and international issues and stressed the importance of achieving global peace, security and stability.

Ghobash said that the UAE, under the leadership of President His Highness Sheikh Mohamed is keen to strengthen its relations with all countries based on mutual respect.

Director of MoFAIC’s Dubai Office receives credentials of Consul-General of Denmark
MoFAIC receives credentials copy from new ambassador of Antigua and Barbuda
Global Village Season 27 VIP Packs
Popeyesâ Buffalo Ranch Chicken Sandwich made with the freshest of ingredients is now available across all Popeyes restaurants in the UAE.