Rain in different parts of the country 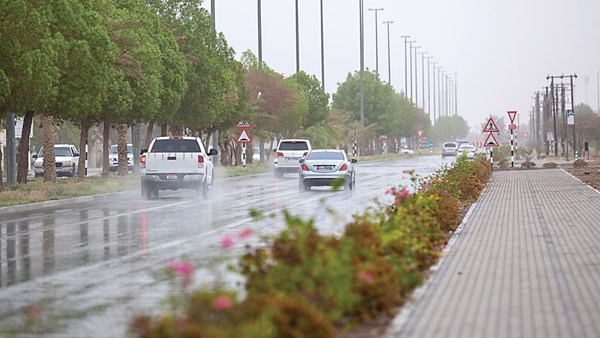 Yesterday, rain of varying intensity fell in separate areas across the country, ranging from light to medium, and included Abu Dhabi, Al Ain, Al Dhafra and Ras Al Khaimah, where there was a possibility of cumulus cloud formation accompanied by rain and active winds with a speed of 50 km/h and it was dusty and dusty.
The country is witnessing an extension of a low-level depression accompanied by an upper-atmosphere depression, which led to dusty and partly cloudy to cloudy at times with cumulus and rain clouds.
The highest temperature in the country was recorded yesterday which reached 48.2 degrees Celsius in Jebel Dhanna (Al Dhafra region) at 12:00 local time.
The National Center of Meteorology expected dusty and partly cloudy to cloudy weather today, with convective and rainy clouds to the east in the afternoon and extending over some inland and southern areas, and southeast to northeast light to moderate speed, active and at times strong with clouds raising dust and dust and their speed. From 20 to 30 up to 60 km/h, while the sea will be light in waves in the Arabian Gulf and in the Sea of ​​Oman.

A Lunch Outside The Box For Creatives At Myrra