Anticipation is growing among crocheters from around the United States as they see their labors take shape in a brilliant art installation at the Sharjah Islamic Arts Festival in the United Arab Emirates. Called The Flying Mosque, the work is on display from December 13 to January 23, 2018 in Sharjah, the country’s 3rd largest city. It’s a remarkable and cleverly conceived crochet art work designed by architect Jin Choi, the latest in her series of large-scale installations with crochet as a major component.

As an architect, Jin ordinarily creates functional structures, yet this is her third work of “lace sculpture,” large scale pieces of crochet art that exist only for their own sake. “They just appear for some time in the city, celebrate with people, then disappear. The ephemerality adds to the beauty. I like the fact that these projects could not exist without the collective and innocent endeavor and desire to create something beautiful, not monetary gains. Furthermore, they are there for everyone to enjoy without going to expensive and restrictive museums. Photography, touching, and going into them is allowed!”

The Flying Mosque is made up of numerous separate forms—globes, spires, arches, all made with crocheted polyester cord fastened to lightweight preformed structures. Multiple spotlights create a hushed glow around them. Visitors can walk around and through these shapes. Only when the viewer stands at a particular vantage point do these elements suddenly align and cohere into the shape of a mosque, floating around and above the viewer. Choi+Shine’s website further explains:

“This project emphasizes the meditative process of finding the whole, while providing a new way of looking at the old and familiar, with one of the most recognizable structure of Muslim world, seen glowing and talking at night into the sky,”

It’s a magical effect that will surely surprise and inspire the festival’s attendees. For more information, go to the Flying Mosque website.

A precursor to The Flying Mosque was The Lace, a gigantic lace bonnet made with oversized crochet motifs that hung in the 2016 Amsterdam Light Festival. Choi+Shine’s website has great photos and videos of the project. Another is The Urchins shown in Singapore at iLight Marina Bay in 2017. Both projects were seen by 1.5 million visitors, and the projects wowed not only those who saw them live but also millions more via photos on social media. 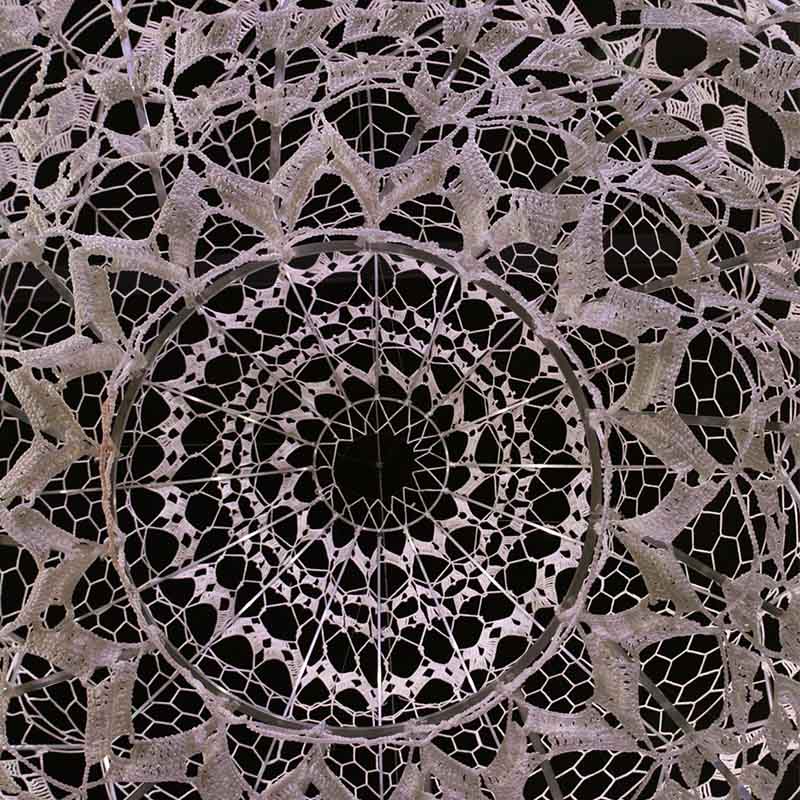 The impact and beauty of these installations captures a seeming contradiction: what happens when the qualities of lace are transposed to a very large scale The delicate patterns are blown up and can be seen clearly in all their intricacy. Viewers can walk all around and through the crocheted cord structures and even touch them. It all adds up to a visceral experience that’s unlike ordinary encounters with handicrafts or works of art on museum walls.

All Choi’s installations have relied on a team of crocheters willing to work according to her specified pattern and with unusual materials—polyester cord of some thickness. Patty Foley, a needle artisan who has contributed to both The Urchins and The Flying Mosque, described her experience of working on the latter this way:

“Everyone writes a pattern differently. Between the written pattern and the graph, and once I got the rhythm of the pattern, I was golden. The piece I was assigned was about 6 feet by 13 feet, and I had difficulty finding a space to work on it as it became larger and heavier. I ended up on the floor to work on it, which was fine. I learned from the first project how to handle the cord. While smooth, it is a bit rough and somewhat stiff. Pacing myself out over the days made it easier on my hands. Picking a bit smaller hook and crocheting a tiny bit looser made a world of difference
to stay on gauge.”

While clearly challenging, Patty found the process tremendously rewarding as a lover and maker of lace.

“By being part of these two projects, I am helping to bring lace out of dusty storage and into the public discussion,” she says.

Once Patty and the other 50 volunteers completed their work, The Flying Mosque was assembled by Choi and her partner Thomas Shine with their team, then at a later stage hung at the site location. Thomas Shine, who has taught structure at Yale University, designed the supporting structure, which incorporates the minimum number of frames to accentuate the intricacy of the lace and 3D printed individual connectors. The installation took 8 days under the scorching sun on the waterfront amphitheater with 12-hour shifts of 8 crews. 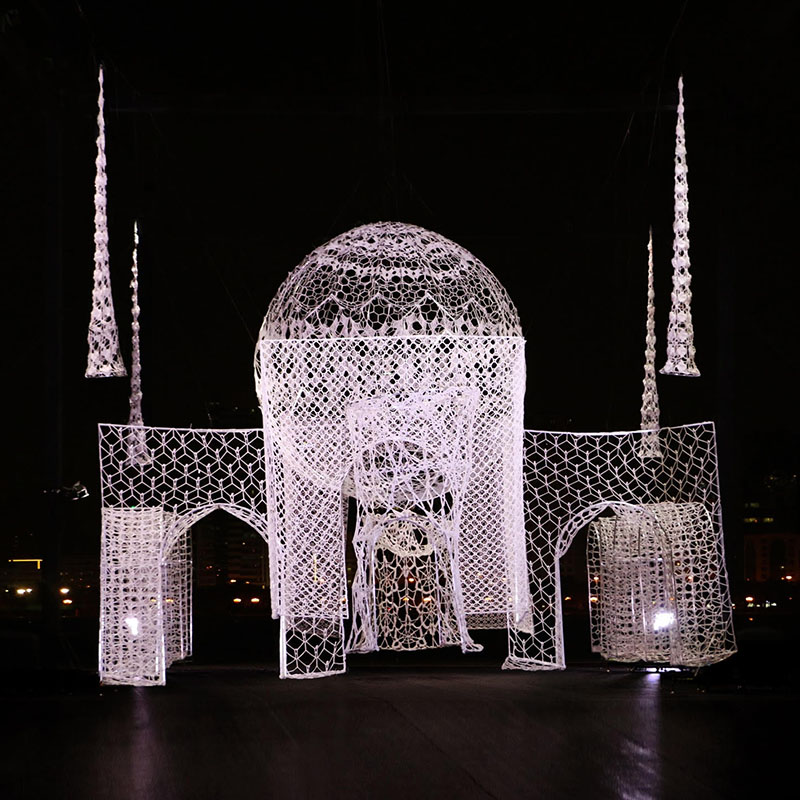 The acclaim that’s met these installations has led to more commissions for this year and next, which in turn offers new opportunities for crocheters to participate. One is a project launched by the Scottsdale Museum of Contemporary Art in conjunction with the annual event Canal Convergence in Scottsdale’s Old Town. Choi+Shine describe the sculpture, Arizona, as “an 8-feet tall and 650-feet long hand-crocheted lace ribbon, which will elegantly meander over and around the Arizona Canal in Scottsdale.”

Volunteer crocheters are needed for this project, and those interested in participating should contact skim@choishine.com. For those in the Scottsdale area, there will be opportunities to meet directly with Choi as the project unfolds.

Arizona will be installed in November 2018 and will stay in place until March 2019. It may be the first time Choi’s work is shown in the United States, an exciting opportunity to bring the work closer to home where more North Americans can see it.

On the other hand, there may be an even earlier Choi on display as the Hunterdon Art Museum in Clinton, New Jersey plans to mount The Urchins, originally shown in Singapore, as part of an exhibit on contemporary lace that goes up in September 2018. This small museum of contemporary art is situated in a 19th-century stone mill, and The Urchins will hang on its terrace. The museum is fundraising for this installation right now, and if you’d like to give to the cause, visit their website.

Dora Ohrenstein is currently writing her seventh crochet book, a stitch dictionary, following on the success of previous titles such as Top Down Crochet Sweaters and The Crocheter’s Skill-Building Workshop. Dora’s designs have frequently been published in Interweave Crochet and many other magazines, and her work can be viewed at www.crochetinsider.com.

Planning a Shopping Holiday? Visit these Destinations for the Ultimate Retail Therapy