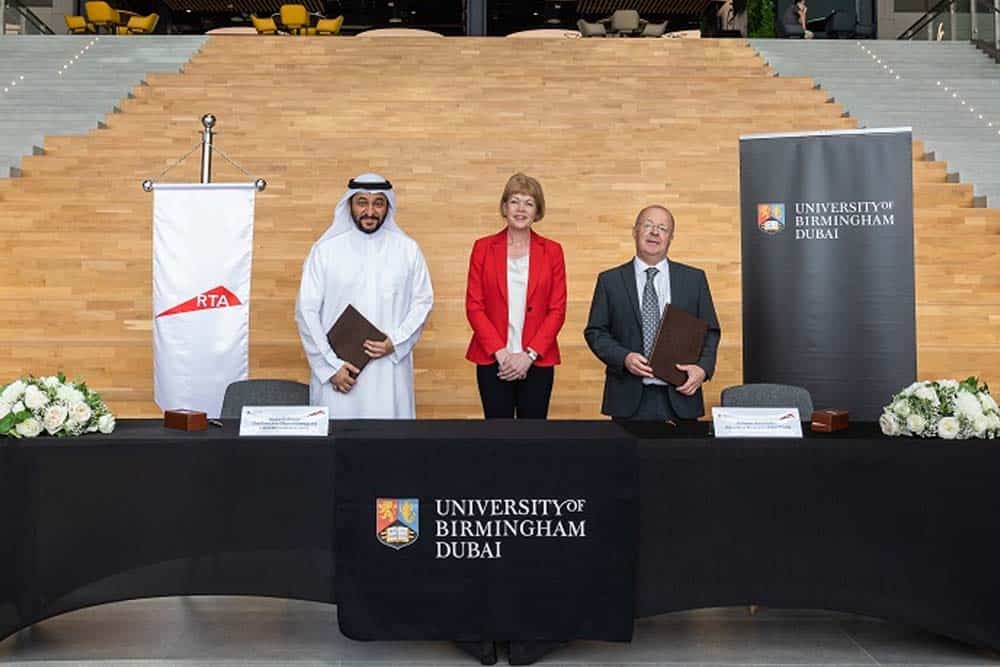 Dubai’s Roads and Transport Authority (RTA) has announced the establishment of an innovation, research and development centre at University of Birmingham Dubai campus.

The centre will promote RTA’s innovation agenda and support the next generation of UAE innovators, start-ups, universities and technology companies.

It will provide a platform for effective co-operation and co-ordination – promoting the latest innovations in the fields of transportation and communications.

The agreement was signed by Nasser Bu Shehab, Executive Director of Strategy and Corporate Governance at RTA, and Professor David Sadler, Provost at the University of Birmingham Dubai, in the presence of Wendy Morton, UK Secretary of State for Transport, who was visiting the campus during a visit to the UAE.

Nasser Bu Shehab said: “Cooperation with our main strategic partners such as universities, start-ups and dealers is a major success factor for the RTA in achieving its vision of global leadership in easy and sustainable mobility and its endeavours to enhance its leadership in the field of innovation.

“The establishment of the RTA Innovation Centre at the University of Birmingham Dubai campus is a milestone in the RTA’s innovation roadmap, as its role will not only provide tools and resources to promote a culture of innovation in the RTA, but also enable the authority to communicate effectively with external parties to the innovation community.”

The signing follows an agreement signed in 2019, to develop the education and research programme, which has now resulted in a unique partnership between RTA and the University to establish an innovation, research and development center on the new campus.

Wendy Morton said: “This partnership between Dubai and the University of Birmingham is a fantastic opportunity to drive innovation in transportation and create exciting opportunities for research and education. This is a great example of a British brand spreading innovation, collaboration and supporting economic growth around the world.”

The centre will support a campus-based teaching and research programme, as well as engaging in vital areas of innovation and experimentation and application. It aims to support co-operation between RTA and the University in other areas such as training programmes and scientific research.

Professor Sadler said: “We are proud to work with the RTA by establishing a partnership that will drive innovation in the fields of transportation and transportation, while creating exciting opportunities for research and academic collaboration.

“As one of the world’s top universities, we are committed to playing our role in supporting the UAE’s drive to drive economic progress based on knowledge and innovation, so the establishment of this specialized centre enhances cooperation between the University of Birmingham Dubai and the Roads and Transport Authority.

“We look forward to welcoming the RTA employees. We also look forward to many years of fruitful cooperation and joint work to innovate and train the next generation of transportation engineers in the UAE.”

The University of Birmingham Dubai offers foundation, undergraduate and postgraduate programmes across a range of areas. More information about study programmes can be found at: https://www.birmingham.ac.uk/dubai/study/index.aspx

Dtec partners with the Joint Italian Arab Chamber of Commerce