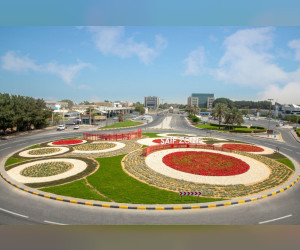 SHARJAH, 30th January, 2022 (WAM) — The Sharjah Airport International Free Zone Authority (SAIF Zone) has achieved a series of tremendous successes during 2021, strengthening its position as a major hub for trade, industry, and logistics services in the region. The directives and vision of H.H. Dr. Sheikh Sultan bin Muhammad Al Qasimi, Supreme Council Member and Ruler of Sharjah, the main catalyst for the Authority to realize such significant milestones.

The total area of the leased and invested lands in the free zone amounted to 263,000 sq ft varied from lands to warehouses for global companies from India, Britain, Spain, Belgium, and others.

The promotional campaigns of the Authority in the Middle East, America, Europe, Asia, and Africa have played an instrumental role in forging strategic partnerships with major investors who, in turn, expressed their interest to set up their businesses in Sharjah and take advantage of the promising opportunities provided by the emirate.

During the last year, SAIF Zone has boosted and enriched its digital services with 36 new features, bringing its total E-services to 284 services. In the projects section, the authority has launched the beneficial owners registration and compliance service, while the service to apply for a building permit and set up a new business was added to the rental and licensing department. These services are part of a comprehensive and integrated system to manage the experience of SAIF Zone customers with high speed and efficiency.

This is part of the Authority’s painstaking efforts to lure direct foreign investments to Sharjah so as to maintain its position as one of the most innovative free zones in the Middle East, through a slew of diverse and integrated digital services to improve the ease of doing business.

“The figures and achievements made in the last year clearly reflect the strength of the national economy of the Emirate of Sharjah, owing to the visions and directives of H.H. Dr. Sheikh Sultan and its ability to adapt to changes in the global economy and create new and promising investment opportunities,” said Saud Salim Al Mazrouei, Director of Sharjah Airport International Free Zone Authority.

Al Mazrouei explained that the Authority has translated these visions by granting exclusive privileges and benefits to the companies and investors wishing to set up their business in SAIF Zone.

He pointed out that the industrial, commercial and logistical infrastructure the Authority provides, as well as its integrated business solutions have cemented its position as a perfect and global destination for companies, in a way that supports economic diversification plans and the emirate’s sustainable growth.

Al Mazrouei added: “During the last year, we have reinforced our digital system by adding new features and services, which boosted the investor confidence in the Authority and improved the ease of doing business. This is in line with the aspirations of the wise leadership of Sharjah and the government’s directions to adopt best practices and build an advanced digital system, in which the Authority works around the clock to serve investors and provides integrated and seamless services to save customers effort and time.”

Advanced Armour Engineering (AAE), a British-owned and managed steel fabrication company, has rented additional land in the Zone at an investment of more than 20 million UAE dirhams ($5 million) as part of its expansion plans.

Concord Enviro FZE, an Indian company operating in the treatment and recycling of industrial wastewater and seawater desalination, has leased additional 130,000-sqft plots of land to set up new facilities to cope with the increasing demand of the local and regional markets for the latest industrial wastewater recycling products produced by the company in multiple sectors, including pharmaceutical industries, textiles, distillation industries, tanneries, steel industries, yeast, paints, dyes, cement, food and beverages, paper, electrical industries, and others.

Also in the same year, The Sharjah Airport International Free Zone (SAIF Zone) has signed an investment agreement with TORRECID, under which, the Spanish group will lease three state-of-the-art warehouses stretching over an area of 20,000 square feet, making it the group’s first headquarters not only in the UAE but also in the GCC countries.

I
The Indian Forpack Industries, a leading manufacturer of recycled Kraft Board & Coreboard Paper, has rented four warehouses at SAIF Zone’s U2 area across a total area of 25.833 sq ft, making it the company’s first headquarter in the UAE.

The company’s initial capital is estimated at AED 10 million, hile the business plan will include producing total packaging solutions, the production and marketing of industrial pallet wrap Stretch film and LLDPE cling film, and the manufacturing of cardboard boxes and tissue paper products.

Bano Puratos, the leading Belgian-Lebanese manufacturer and supplier of innovative products of raw materials, utensils and machinery used in the chocolate, bakery, pastry, and ice cream industry, has announced expansion plans to double its monthly production capacity from 300 to 600 tonnes and increase the list of products from 45 to 150, in 2022.

Bano’s production capacity will also triple in 2023 to reach 900 tonnes, as yet another testament to Sharjah’s position as one of the best investment hubs in the world. Earlier last year, Pano Puratos has established the region’s largest production facility in the Sharjah Airport International Free Zone (SAIF Zone) with investments estimated at AED20 million.

This reflects the quality of the facilities provided by the Authority and its position as an ideal environment for companies wishing to expand in the regional markets, and its advanced infrastructure and logistical services, in addition to its strategic location and its proximity to airports and international markets.

Apart from investment deals, SAIF Zone took part in The Big 5, the largest and most influential building and construction exhibition in the Middle East, Africa, and South Asia.

The Authority took advantage of this major event to highlight its various services to investors, which made it one of the most important free zones in the region. This includes offering exclusive advantages in order to attract foreign investments and providing the added value sought by the investors.

Other incentives include 100% foreign ownership of businesses, 100 % repatriation of capital and profits, and 100 percent corporate or personal income tax exemptions, 100% import and export tax exemptions. This is in addition to 24-hour services, all licenses issued within one hour, and a hotline that guarantees the availability of immediate manpower, equipment, shipment and customs clearance, 24/7 security and emergency services, and labor accommodation within the zone.

New campaign urges residents to step up to ‘transform 250,000 lives’