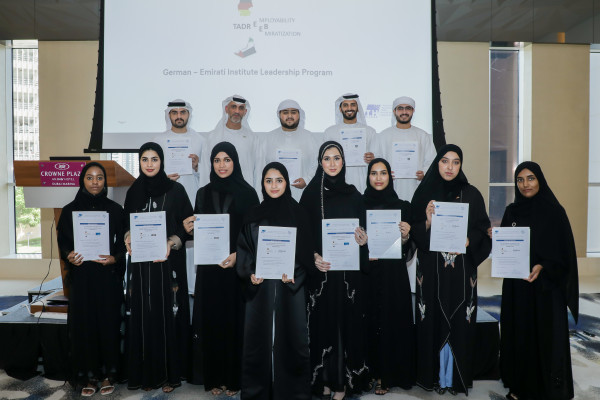 ABU DHABI, 18th September, 2022 (WAM) — Sandooq Al Watan, a community initiative launched by a group of Emirati businessmen that aims to build a sense of social cohesion among members of the community, honoured on Saturday the first batch of Emirati youth who have completed the first intensive training programme in industrial technology in Germany.

A galaxy of leaders of academia in the UAE attended the event which was held under the patronage of Sheikh Nahyan bin Mubarak Al Nahyan, Minister of Tolerance and Coexistence, and Chairman of the Board of Directors of Sandooq Al Watan.

The trainees received 12-week-long hands-on training in a number of advanced factories in Germany as part of Sandooq Al Watan’s strategy to deliver the UAE leadership’s vision for creating a sustainable, knowledge-based economy for generations to come and preparing and qualifying a generation equipped with advanced technology skills and responsive to digital age challenges and coping with future transformations.

Yasser Al Gergawi, Director-General of Sandooq Al Watan, said the training programme, which was designed by international experts and CEOs of German companies operating in the UAE in association with the Technical University of Applied Sciences in Germany, would prepare a generation of Emirati technology entrepreneurs who could deal with rapid job market changes resulting from tremendous technological progress.

The programme, which drew students from the Khalifa University, UAE University, Higher Colleges of Technology and the University of Sharjah, was organised by Sandooq Al Watan in collaboration with Presidential Court, German Embassy in Abu Dhabi, and the German Emirati Joint Council for Industry and Commerce (AHK), he added.