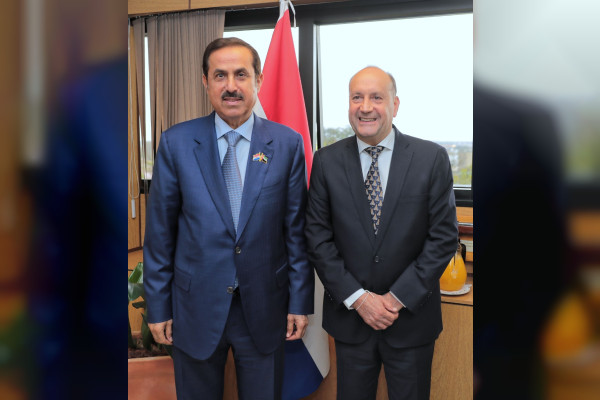 ASUNCION, 20th September, 2022 (WAM) — Saqr Ghobash, Speaker of the Federal National Council (FNC), and Oscar Salomon, President of the Senate of Paraguay, discussed ways of reinforcing the parliamentary cooperation between the UAE and Paraguay.

During the meeting, attended by Saeed Abdullah Al Qamzi, UAE Non-Resident Ambassador to Paraguay, the two sides highlighted their keenness to advance their relations, through exchanging high-level visits, discussing issues of mutual concern, signing agreements and Memoranda of Understanding and establishing parliamentary friendship committees, to keep pace with the developing ties between the two countries.

The meeting was attended by an FNC delegation that included members of the Emirati-Latin American and North American Parliaments Friendship Committee.

Ghobash highlighted the key role of parliaments in achieving the visions of their leaderships to strengthen the partnership between the two countries.

The UAE has launched the Principles of the 50, which aims to establish a new era in the process of national development and promote the country’s values based on peace, dialogue, tolerance, coexistence and human solidarity, he added, noting that these objectives include increasing the country’s provision of humanitarian aid, as an integral part of its foreign policy.

Ghobash then invited Salomon to visit the UAE.

For his part, Salomon welcomed the visit by Ghobash and his delegation, stressing that it affirms the keenness of both parties to develop their ties.

He also welcomed the invitation to visit the UAE, noting that it would help strengthen the cooperation and friendship between the two countries.