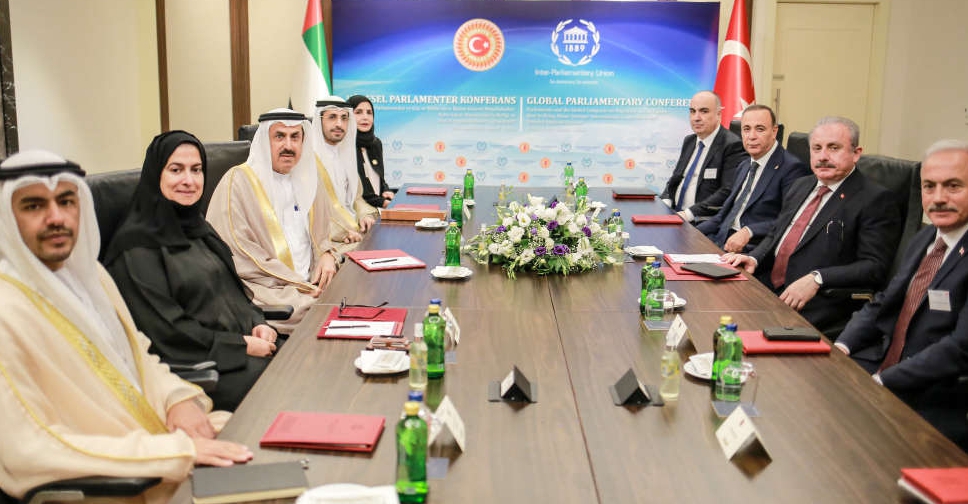 Saqr Ghobash, Speaker of the Federal National Council (FNC), and Mustafa Şentop, Speaker of the Grand National Assembly of Turkey have met to discuss their friendship and parliamentary cooperation, and exchanged views on areas of mutual concern.

The meeting took place on the sidelines of the Global Parliamentary Conference currently being held in Turkey, under the theme, “Parliaments and the Global Compacts on Migration and Refugees: How to Bring About Stronger International Cooperation and National Implementation?”.

The Speaker of the FNC thanked Şentop for the invitation to attend the conference, highlighting the importance for parliamentarians to discuss the topics raised during the event. He also stressed the FNC’s keenness to enhance its ties with the Turkish parliament, which is a major driver for building cooperation between the two countries.

He then reaffirmed the significant advancement in relations between the UAE and Turkey and their ongoing keenness to improve them further, noting the visit of President His Highness Sheikh Mohamed bin Zayed Al Nahyan to Turkey in November, and the visit of Recep Tayyip Erdoğan, President of Turkey, to the UAE in February 2022.

Şentop extended his best wishes to His Highness Sheikh Mohamed bin Zayed Al Nahyan on his election as UAE President, stressing that the friendship between the two countries is witnessing significant development.

He then highlighted the desire of the Turkish Parliament to enhance cooperation with the FNC, and to encourage mutual parliamentary visits.

Expo 2020 marks new chapter with city of the future