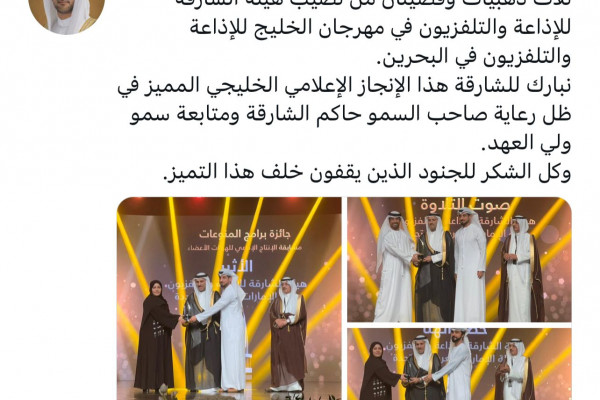 In a tweet on his Twitter account, H.H. Sheikh Sultan bin Ahmed bin Sultan Al Qasimi, Deputy Ruler of Sharjah and Chairman of Sharjah Media Council, blessed the achievement of the Sharjah Broadcasting Authority, and its honouring at the Gulf Radio and Television Festival.

He said, “Three golds and two silvers go to the Sharjah Broadcasting Authority in the Gulf Radio and Television Festival in Bahrain. We congratulate Sharjah on this distinguished Gulf media achievement under the patronage of H.H. the Ruler of Sharjah, and the follow-up of Sharjah Crown Prince. All thanks to all those behind this excellence.”

In his statement about this achievement, Mohammed Hassan Khalaf, Director-General of the SBA, said, “We are all proud of the distinguished harvest of awards that the SBA’s programmes competed for, which proved its excellence and leadership at the Gulf level. This achievement motivates us to do more to promote the values of purposeful media adopted by the Emirate of Sharjah within the visions and directives of H.H. Dr. Sheikh Sultan bin Muhammad Al Qasimi, Supreme Council Member and Ruler of Sharjah, and to achieve its mission of providing society with high-end production that meets the aspirations of various segments of society, and motivates us to present more programmes that are added to the Authority’s achievements to be a mirror that reflects the civilised face of the Emirate of Sharjah and the UAE before the world.”