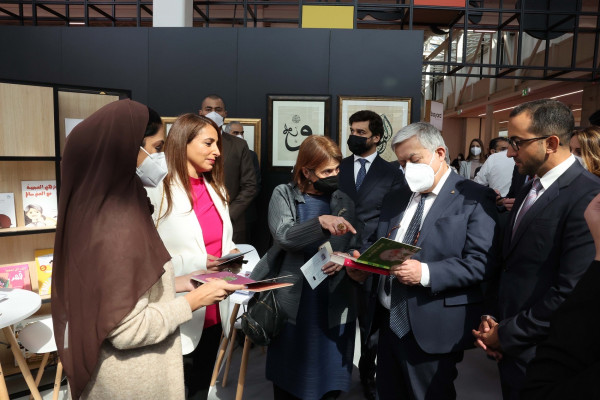 BOLOGNA, Italy, 22nd March, 2022 (WAM) — The UAE flag fluttered high in the historic Italian city of Bologna where Sharjah is being celebrated as Guest of Honour at the 59th Bologna Children’s Book Fair (BCBF), which runs until March 24. Over the course of four days, the north Italian city is showcasing the unique cultural vision of Sharjah to a diverse global audience and celebrating the intellectual and cultural legacy of the Emirati and Arab worlds.

The opening ceremony was held in the presence of Bodour Al Qasimi, President of International Publishers Association (IPA); Sheikh Fahim Al Qasimi, Chairman of the Department of Government Relations (DGR) in Sharjah, who is heading the emirate’s GoH delegation to the book fair; HE Ahmed bin Rakkad Al Ameri, Chairman of Sharjah Book Authority (SBA); Matteo Lepore, Mayor of Bologna; and Glanpiero Calzolari, Director of BCBF.

Over the next four days, the emirate’s cultural project founded by His Highness Sheikh Dr. Sultan bin Muhammad Al Qasimi, Supreme Council Member and Ruler of Sharjah, is being presented by Bologna as a model for cities keen on embracing a knowledge-based development strategy at the BCBF, which is a leading professional event dedicated to the children’s publishing industry.

Addressing the guests and attendees on behalf of His Highness the Ruler of Sharjah, Sheikh Fahim Al Qasimi, Chairman, Department of Government Relations (DGR), Sharjah, drew parallels between the emirate and Bologna describing both cities as rich in culture and education with a focus on publishing.

Recounting His Highness’s contributions to shaping his life as an avid reader and a champion of cross-cultural cooperation, Sheikh Fahim noted: “I grew up in a small city by the seaside, where a young leader decided to build the city’s values on culture and education. This young leader’s vision created a seismic shift in the Arab world’s impact on publishing. Today, Sharjah is a hub of international publishing, a UNESCO World Book Capital, and has given the International Publishers Association its second female president, Sheikha Bodour Al Qasimi.”

Talking about the emirate’s 50-year efforts to inculcate the habit of reading in the community, especially amongst children, through its book fair and children’s reading festival, Sheikh Fahim said: “If you’re into something you’re into books, and if you’re into books you’re into Sharjah”.

Highlighting the vital role played by the publishing industry, especially during the pandemic, IPA President Bodour Al Qasimi said: “We were one of the few sources of comfort and security to millions of children and readers in a world that was abruptly thrown into chaos and uncertainty. I am proud of the work publishers have been doing throughout the world to serve their communities and to adapt to rapid change.”

“It’s important we build on this renewed sense of purpose with a unified vision and a clear road map,” added Bodour Al Qasimi, who also highlighted the various initiatives undertaken by IPA to serve stakeholders across the publishing industry.

The IPA President added: “I am also honoured and proud that Sharjah is the Guest of Honour at this year’s book fair. On behalf of everyone in Sharjah, I want to say a huge thank you for your continued partnership and collaboration. Together, we will continue building bridges of understanding, dialogue, and cultural appreciation.”

The power of books and culture in unifying visions of cities and countries In his keynote address, Matteo Lepore, Mayor of Bologna, stressed on the power of culture and knowledge in unifying visions and ambitions of cities and countries around the world. He pointed out that Bologna holds great respect for Sharjah and her cultural journey. He added that Bologna was keen on strengthening the cultural relationship and forging new partnerships with Sharjah.

Glanpiero Calzolari, Director of BCBF, welcomed Sharjah and its representative entities leading the emirate’s programme at the book fair. He stressed that the Italian community is excited to learn more about the Emirati and Arab literary movement, adding that the book fair was proud to host a city globally celebrated as a centre of knowledge and creativity.

In the presence of diplomats and representatives of Emirati and Italian cultural institutions, the Director of the book fair inaugurated and toured Sharjah’s Guest of Honour pavilion, who was briefed on the participating entities from across the UAE and the Arab region, and given an insight into their offerings during the book fair, which encompasses the fields of arts, publishing, heritage, translation and other creative sectors.

The visiting dignitaries also reviewed the published works of His Highness the Ruler of Sharjah, which was translated from Arabic into the Italian language, in addition to other translated titles by the Sharjah Book Authority that are aimed at introducing Italian readers to the creative and literary output of Emirati and Arab authors. The officials were also briefed on the cultural magazines and periodicals issued by institutions across Sharjah, and apprised of its value and appeal for readers in the region.

Khoula Al Mujaini, Director of Fairs and Festivals at SBA, gave the dignitaries an introductory tour of the Children’s Book Illustration Exhibition, and highlighted ‘Illustration Production Workshops’ organised by SBA to enhance the experiences and expertise of Emirati artists and present their works to Italian and European publishers and creators.

As Guest of Honour, Sharjah will shine a light on the cultural initiatives that reflect the emirate’s distinctive cultural journey. The emirate will organise creative workshops, panel discussions, storytelling sessions and more in the Guest of Honour pavilion and at various other sites. Entities in the emirate will also conduct school visits to introduce Emirati and Arab literature to Italian and Arab students.

On the sidelines of the opening ceremony, Bodour Al Qasimi and HE Ahmed Al Ameri, attended the BCBF awarding ceremony to honour authors of children’s literature.