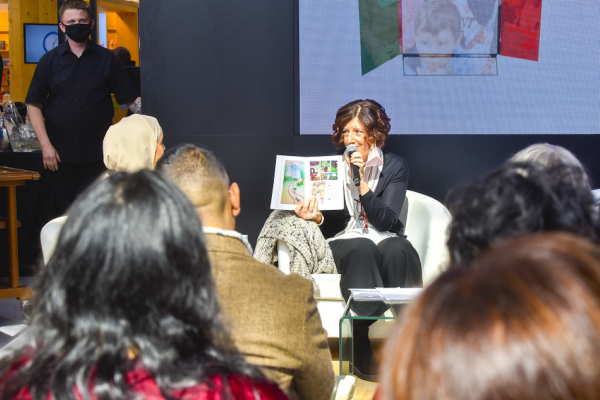 SHARJAH, 22nd March, 2022 (WAM) — A key highlight at the Sharjah’s Guest of Honour pavillion at the ongoing 59th Bologna Children’s Book Fair (BCBF) is a showcase of the emirate’s successful efforts in enhancing the language learning experience of Arab children worldwide by strengthening the presence of Arabic children’s literature in libraries across continents.

Kalimat Foundation, a Sharjah-based global non-profit dedicated to bringing less fortunate Arab children around the world closer to books written in their mother tongue has been a key driver of these efforts through its ‘Pledge a Library’ initiative. In Italy, Kalimat Foundation has collaborated with the International Board on Books for Young People (IBBY)’s Italian chapter to bring Arabic books to schools and learning centers attended by children of Arab origin.

The success of “Pledge a Library” initiative was discussed by an expert panel during a session titled ‘Little Arabic Libraries’. The session hosted Reem Al Jassim, Manager of special initiatives, Kalimat Foundation; Flavia Cristiano, President, IBBY Italy; Silvana Sola and Marcella Terossi, coordinators of the project for IBBY Italy; Maria Luisa Albano, a teacher at one of the ‘Pledge a Library’ beneficiary schools. The session was moderated by Veronica Sirotti, Director of Bologna Libraries .

Flavia Cristiano spoke about the project led by IBBY Italy in collaboration with Kalimat Foundation to provide compact libraries containing Arabic language books to Italian schools and learning centers. “This experience reflects our vision to promote children’s learning of their mother tongue and helping them discover the common bonds of humanity”, she noted.

“Arabic is one of the seven most widely spoken languages in Italy. Italians are interested in it because we feel that we are very close to the Arab culture, and share similar cultural values,” Cristiano added.

Reem Al Jassim, Manager of special initiatives, Kalimat Foundation; explained that the Pledge a Library was designed by Kalimat Foundation to bring children’s books libraries, each containing 100 books in Arabic, to inculcate the values of Arabic culture in young readers. She added that the initiative has distributed 15,000 books since its launch in 2016, noting that the initiative distributed 122 libraries and reached 152,000 children around the world.

A short documentary on the Italian chapter of the Pledge a Library initiative was played during the session. The video highlighted the reaction of Arab children in Italian schools and educational centres and how they engaged with Arabic books, their experience of learning their mother tongue, and the role of Arabic stories in teaching them to appreciate their authentic identity as well as the Italian culture and identify what they have in common.

Highlighting the importance of the partnership between Kalimat Foundation and IBBY Italy, Marcella Terossi, coordinator of the project for IBBY Italy; said: “The Foundation has played a key role in supporting IBBY Italy’s project to encourage children’s learning in their mother tongue and raise their awareness of common human values. This would not have been achieved without the efforts of Bodour Al Qasimi, President of the International Publishers Association (IPA), who invited us to participate in the activities dedicated to promoting children’s books and reading in Sharjah.”

“With Kalimat Foundation’s support, we have successfully reached several Italian cities and towns, which was a big challenge especially in the past two years when the world faced many difficulties due to the pandemic. We continue to work together to be able to reach out to more learning centres and schools to expand the project’s impact,” she added.

Maria Luisa Albano explained that the initiative allowed her school to create new models for teaching Arabic-speaking children and integrating them with the Italian community.

“We made a comparison between Arabic and Italian cultures to identify common cultural factors. For example, we compared the story of the Arab scholar and explorer, Ibn Battuta and the Venetian merchant and explorer, Marco Polo. We also read a storybook by the Lebanese writer of children’s and young adult books, Fatima Sharafeddine, and compared it with a work by Italian author Roberto Saviano,” Albano further noted.

‘Pledge a Library’ was launched in 2016, to empower refugee children in countries across Asia, Africa, Europe, and South America by providing them with Arabic books that help them preserve their native language, culture, traditions and heritage.