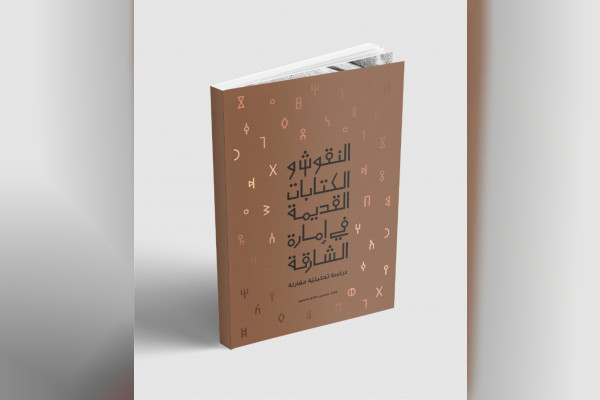 SHARJAH, 24th May, 2022 (WAM) — A new edition by Sharjah Museums Authority, entitled “Ancient Inscriptions and Writings in the Emirate of Sharjah”, opens the door for those interested and concerned with the history of inscriptions and writings to learn about the history and civilisation of the Emirate of Sharjah and the United Arab Emirates in general, through an analytical study of the ancient civilisations in the region.

The book, which provides a comparative analytical study, by Khaled Hussein Saleh Mansour, Senior Researcher at the Sharjah Archeology Museum, is one of the most important publications for researchers, archaeologists and students, as it is a historical reference documenting many historical stages in the Emirate of Sharjah, by tracing the inscriptions, lines and writings that were discovered in two areas of the emirate, namely Muwailih, where a single inscription was discovered and i dates back to the seventh century B.C., and the second area is Mleiha, in which many inscriptions were found. Mleiha, with its various monuments and various inscriptions, is a witness to the general civilisation movement in the southeast of the Arabian Peninsula since the fourth century BC until the advent of Islam.

The author provides the reader with a historical reference tracing and identifying inscriptions and writings.

The publication consists of two main sections that include five parts. The first section includes a comprehensive introduction to writing and its beginnings, forms and types, the invention of the alphabet, and the use by the peoples of the Near East with reference to the inscriptions of the Arabian Peninsula.

The second section sheds light on the languages of the writings discovered in the Emirate of Sharjah, by referring to the Musnad script and the Zabur script, discovered at the site of Mleiha, as well as Aramaic inscriptions, which is an important language of the ancient Near East.

The publication includes a section entitled “Man and Writing”, on writing and language, pre-writing, the need to write, and the journey of writing.

The public may review the information presented in the book by visiting the Sharjah Archeology Museum, as well as visiting the antiquities that have been discovered in the Emirate of Sharjah since the beginning of archaeological excavations in 1973 AD until now.

Successive excavations have proven that the history of Sharjah is deeply rooted, and that settlements and villages appeared on its lands thousands of years ago. Visitors to the museum are able to see the past and learn about the civilisations in the region since the Stone Age by viewing the tools of daily life, coins, jewelry, pottery and ancient weapons used by people who lived on the same land for thousands of years, and to learn about the shapes of their graves, houses and burials, as well as viewing the texts of the first writing whose first letters appeared in Sharjah more than 2500 years ago.