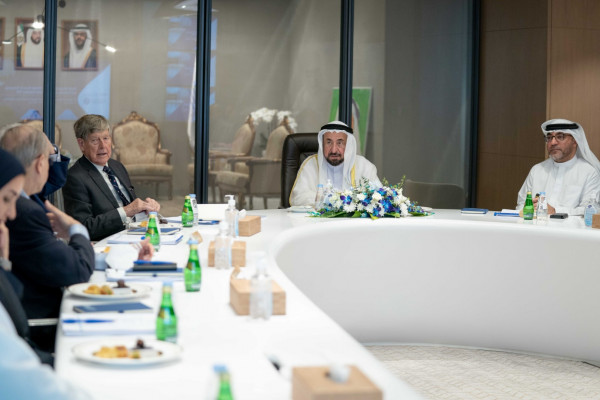 At the beginning of the meeting, the Sharjah Ruler welcomed the attendance from the Board of Directors of SRTI Park and the Business Company of the American University of Sharjah, appreciating the great efforts being made to advance the company and the SRTI Park.

During the meeting, Dr. Sheikh Sultan was briefed on a number of project models for SRTI Park, such as the research centre, smart warehouses, and the technology sector in general, which supports the achievement of the set goals.

Dr. Sheikh Sultan listened to a detailed explanation about the joint projects between SRTI Park and private sector institutions, where he was acquainted with a number of projects including the transportation sector and digitisation, as well as innovative research projects between the American University of Sharjah and the Sharjah Research, Technology and Innovation Park in a number of scientific fields.

He also listened to an explanation of the laboratories in SRTI Park and their capabilities for virtual reality, augmented reality, and 3D printing.

The meeting dealt with the marketing activities carried out by the SRTI Park, the relationship with institutions concerned with innovation and the ongoing efforts to strengthen and develop them. It also discussed the operational budget and structure of the SRTI Park, in addition to ways to develop the business of the American University of Sharjah, its budget, and future plans.