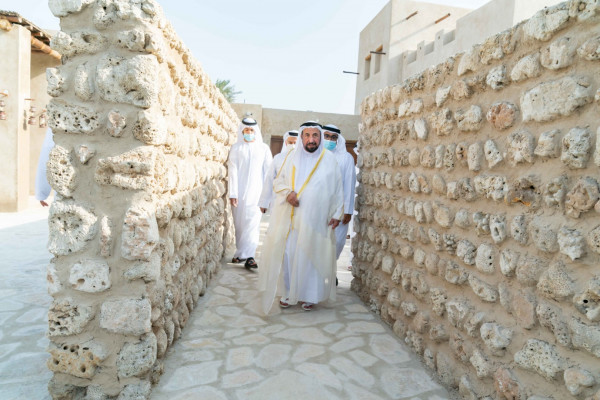 The Sharjah Ruler toured the corridors of the neighborhood, whose revival and restoration comes according to his directives as the region constitutes a historical and archaeological legacy to be marked as an important tourist landmark for visitors from different regions.

Dr. Sheikh Sultan was also briefed on the remaining process of the restoration and revival of the area, and listened to a detailed explanation of the progress of the works there, and the most prominent archaeological evidence discovered during the restoration operations.

The neighborhood includes the hospital, whose doors have been redesigned like its main shape in the past, in addition to displaying the collectibles of the therapist at the time in its private display rooms.

The neighborhood also includes, according to the data and information, 15 old houses that were previously demolished and reconstructed, where 5 of them opened in the current stage, to complete the remaining houses in the coming stages.

The neighborhood includes the heritage market, which was reconstructed in a larger size than its original size to include 16 shops for young Emirati entrepreneurs.

The old heritage mosque was renovated, maintained, and expanded, as it had been subjected to many demolitions and construction in the past. The drawings and inscriptions previously found on the pulpit and the mihrab were taken into consideration.

The Sharjah Ruler also inaugurated the House of Sheikh Saeed bin Hamad Al Qasimi, which has been restored and rehabilitated, as it is one of the most important heritage landmarks in the Emirate of Sharjah, and one of the most prominent evidence of the emirate’s long-standing economic and cultural role. The house was built between 1898 and 1901 opposite the city’s historical fortress on the beach.

Global Village extends its Season 26 in celebration of Ramadan