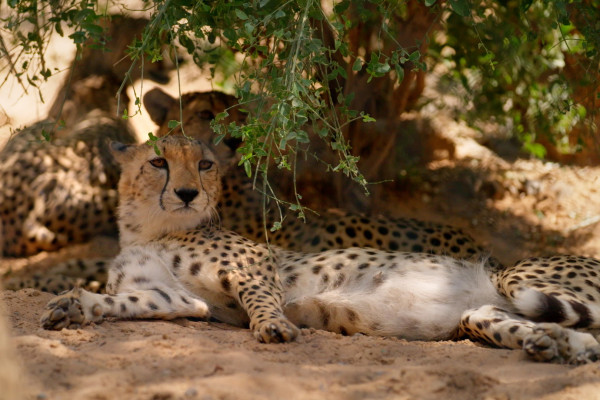 SHARJAH, 5th October, 2022 (WAM) — The first show of the documentary film “Sharjah Safari” will air on Sharjah TV over the course of three days, from 7th to 9th October, at 13:30, with its three parts chronicling the journey of establishing the “largest safari outside the African continent”.

The film reviews the stages of the project’s establishment from its launch as an idea to embrace the largest living model of African environmental and biological diversity at the “Al Bardi” reserve in Al Dhaid, to its inauguration by H.H. Sheikh Dr. Sultan bin Muhammad Al Qasimi, Member of the Supreme Council and Ruler of Sharjah, in February 2022.
The film took more than a year to produce, and is the result of a partnership between Sharjah Broadcasting Authority (SBA) and Sharjah Government Media Bureau (SGMB), in coordination with the Sharjah Environment and Protected Areas Authority (EPAA).
The film sheds light on the rare groups of endangered animals that are housed in the safari, and highlights the stages of work on the project, which began 5 years ago cost about AED1 billion. It includes interviews with a group of specialists and experts in the field of biology and veterinary science, in addition to engineers and technicians working on the project.
Mohammed Hassan Khalaf, Director-General of SBA, stressed that the production of the “Sharjah Safari” film aligns with the authority’s mission, which seeks to highlight Sharjah’s leadership in various development sectors that consolidate the emirate’s position as a leading global tourist destination.
Tariq Saeed Allay, Director-General of the Sharjah Government Media Bureau, said that this joint work translates the office’s directions in supporting the various initiatives and projects of Sharjah in all its sectors, as part of a media plan they have been working on since the project’s inception.
“Sharjah Safari” is a documentary film produced by the Sharjah Broadcasting Authority, and a team that includes: executive producer Mohammed Hassan Khalaf, director Gary Keane, producers Ashraf Ali and Tony Degan, and cinematographer Michael O’Donovan.