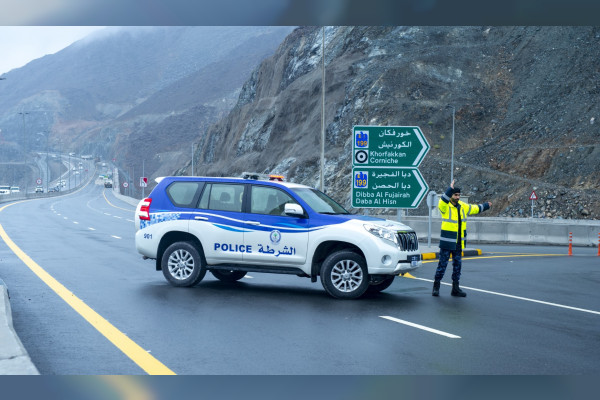 SHARJAH, 8th August, 2022 (WAM) — Following the exceptional two-day adverse weather conditions, which resulted in flooding in many areas in the Emirate of Sharjah, officials praised the efficient response and competence of emergency teams mobilised to safeguard lives and property against the severe impact of the heavy rainfall.

The emirate had braced up to address this anticipated summer deluge by monitoring potential risks and reviewing federal response plans to ensure the readiness of emergency crews and mechanisms and spread awareness and safety tips.

More than 3,400 rescue and evacuation operations were conducted in the eastern regions of the emirate by the Sharjah Police General Headquarters, which received and handled more than 10,782 emergency calls, with the full support of 503 crew members, 101 emergency vehicles and 45 patrols.

Teams from the National Emergency Crisis and Disasters Management Authority (NCEMA) partnered with relevant local and federal authorities, including the Ministry of Defence, Ministry of Interior, Ministry of Community Development, Sharjah Civil Defence Authority, and private sector entities to pre-emptively prepare for potential effects of the dire weather conditions.

Brigadier General Abdullah Mubarak bin Amir, Deputy Commander-in-Chief of Sharjah Police, praised the concerted efforts between the various federal entities and the Sharjah Police, which enabled the emirate to face hazardous weather of exceptional severity at the nationwide level.

He also commended the high level of professionalism, ability and readiness of the emirate’s emergency teams and other relevant entities, which were critical for dealing with these exceptional circumstances, preventing damage and ensuring the safety of citizens and residents in the emirate, as per the directives of H.H. Dr. Sheikh Sultan bin Muhammad Al Qasimi, Supreme Council Member and Ruler of Sharjah.

The Deputy Commander-in-Chief of the Sharjah Police extended his thanks and appreciation to all institutions, individuals, volunteers, and private sector companies who supported emergency teams that helped those affected by the floods.

Safe zones Relevant entities across the emirate exerted extensive efforts and managed to turn the affected areas into safe zones, thanks to effective coordination and rapid response.

The Sharjah Police GHQ enforced a set of immediate emergency measures across the eastern regions, closing roads that led to the affected areas to ensure the safety of individuals while reopening roads closed due to flood damage to aid trapped citizens.

Preparedness was intensified in valleys and areas prone to rockfall debris. Rescue teams were also deployed to provide immediate assistance to those affected and maintain their safety.

Support and Accommodation Evacuations were in full swing in the eastern regions, where transportation and accommodation were provided to more than 2,100 affected people in schools and hotels in the area.

Brigadier General Bin Amir noted that the Sharjah Police had assigned a special team to inspect the various emergency shelters, follow up on developments and ensure they provided food supplies to those in need.

In flood-hit Kalba, 2,069 residents were moved into schools, while nurses were transferred from Fujairah to support medical efforts at Kalba Hospital. Etisalat engineers were also flown in by the Sharjah Air Wing Department to restore communications in the area, while a team from the Sharjah Electricity, Water and Gas Authority endeavoured to restore electricity.