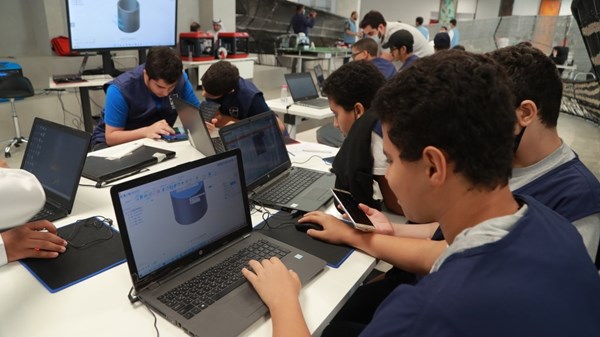 A qualitative leap has been achieved at the “Your Summer and Yana” events, organized by “Sharjah Youth” of the Rubu’ Qarn Foundation for Making of Leaders and Innovators, as part of its workshops aimed at empowering young people and supporting them in the journey to discover and invest their abilities by participating in programs designed according to the interests of this age group 3D animation to attract young people who participate in the skills laboratory through Al Nashia Studio by teaching them the art of producing cartoon films , starting with story design, character drawing and animation.
During 15 hours of training at the center’s headquarters, the participants mastered the aspects of animation in terms of photography, sound recording and presentation, based on the stories that suited their creativity and imagination.
The workshop began with its first classes to offer an enrichment program in design and 3D printing, which relied on communicating the fundamentals of technical design to students and teaching them how to use the printer, which was presented by engineer Baraa Hamdi Al-Jilani.
“Sharjah Youth” learned to design useful tools such as a ball holder and a phone holder, and then converted the designs into models using the 3D printer.
According to the training plan, Sharjah Youth received an introduction to 3D design, a CAD program based on 3D modeling and an introduction to the Fusion 360 program, learning the basic tools of 3D design.

They learned about 3D printing, how it works and how it works, moved around learning about spinning and sweeping techniques and building different shapes for the pen holder, right through to basic concepts in 3D modeling which included learning the ceiling technique and learning how the joints work.
The workshop provided the opportunity for 3D design, modeling and printing of various objects and to unleash their imaginations for creativity and innovation.
Abdul Hamid Al Yasi, Director of the Youth Welfare Department at Sharjah Youth, emphasized the importance of the 3D animation workshop. He referred to the foundation of the workshop, which through its training classes worked to refine the technical and creative skills to produce and produce animation for young people, besides developing their skills and expertise to turn their ideas into animation.