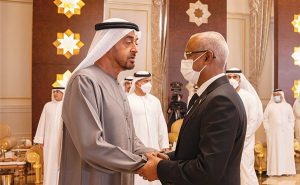 The President of the Maldives has congratulated His Highness Sheikh Mohamed bin Zayed Al Nahyan as the new President of the UAE, saying HH Sheikh Mohamed is a beacon of hope.
In an exclusive interview with the Emirates News Agency (WAM), Ibrahim Mohamed Solih, President of the Maldives, said,”His Highness Sheikh Mohamed’s strong statesmanship and his keenness for development with a strong focus on progressive Islamic values prove that he is a beacon of hope for the entire Middle East region.”
The Maldives always regarded His Highness Sheikh Mohamed ‘a brother and a close ally’, he asserted.
“I have met His Highness five times during my term in office; he is one of the leaders whom I have met the most frequently. I wish him every success in his new leadership role, and I look forward to working closely with His Highness to expand our existing relations over the coming years,” the president remarked.
President Solih was on an official visit to the UAE to offer condolences to President HH Sheikh Mohamed bin Zayed Al Nahyan on the passing of Sheikh Khalifa bin Zayed Al Nahyan.
He said that His Highness Sheikh Khalifa was always the first among the global leaders to provide assistance to the needy, recollecting his support to the Maldives during the difficult times such as the Indian Ocean Tsunami and Covid-19 pandemic.
“With His Highness Sheikh Khalifa’s innovative approach to growth, the UAE has become a centre of global commerce, and of Islamic knowledge and culture. The UAE has prospered at global stage during his tenure and become a close and dear friend of the Maldives,” he noted.
Maldives-UAE relations reached great heights with the blessings of Sheikh Khalifa, Solih emphasised. The most notable milestone was the opening of the Maldives Embassy in Abu Dhabi in 2012 and UAE Embassy in the Maldives in 2019, he said.
Emirati investments in the Maldives saw a significant increase during Sheikh Khalifa’s tenure. Agreement on promotion and protection of mutual investments, development of Maldives’ main airport – Velana International Airport, with the UAE’s support; and cooperation in renewable energy and counterterrorism; were important developments in the relations, he explained.
The United Arab Emirates has become the principal gateway for the rest of the world to visit the Maldives, the country’s head of state said, adding that UAE was his country’s lifeline during the pandemic.
“It is particularly noteworthy that over the course of the past two decades, the UAE has become the principal gateway for the rest of the world to visit the Maldives, with Dubai becoming the main hub and Emirates the top airline bringing tourists into the country,” said President Ibrahim Solih.
“This connection proved especially critical for us during the pandemic when the UAE became our lifeline to the rest of the world with Emirates airlines flying in essential cargo and medicine to the Maldives. We will forever be grateful for the thoughtful consideration of the UAE towards us,” said the president of the Indian Ocean Island nation, which is a prominent global tourism destination with its pristine beaches and other rich natural and cultural attractions.

UAE Press: Earthquake in Turkey and Syria is a moment for international...

More than 4,300 dead in Turkey and Syria after powerful quake