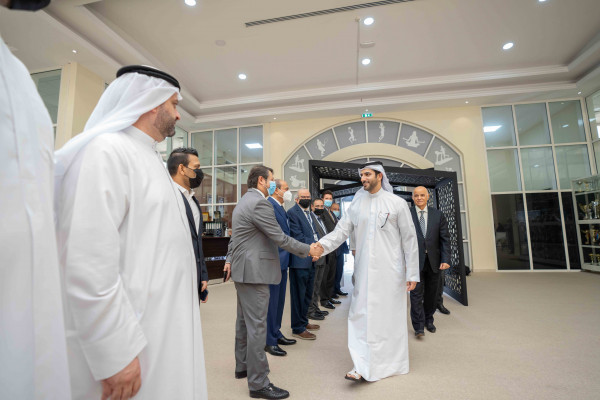 The opening ceremony began with verses from the Holy Quran, after Prof. Hamid Al Naimiy, Chancellor of the UoS, gave a speech in which he thanked Sheikh Sultan bin Ahmed bin Sultan Al Qasimi for attending the exhibition and sponsoring various scientific and academic events, praising keenness on the progress of the university and the development of the knowledge and capabilities of its students in various fields.

The attendance of the opening ceremony watched a visual presentation that dealt with the story of building Sharjah, by monitoring stations from the experience of the Ruler of Sharjah, and his great and continuous efforts over the past years in various fields, focusing on the educational, scientific and knowledge renaissance and others.

Dr. Jairo A. Lugo-Ocando, Dean of the College of Communication, gave a speech in which he praised the strategic vision that the University of Sharjah is working on in various fields to support its students in all faculties and disciplines, and its commitment to distinguished levels in education and learning, which makes it an appropriate environment for innovation and creativity.

At the end of the opening ceremony, Sheikh Sultan bin Ahmed honoured the sponsors and partners, and visited graduate students’ projects pavilions from the College of Communication, which amount to 78 projects completed by 113 students in the college’s various disciplines, where he listened to a detailed explanation from the students about their various projects, which included creative and distinguished ideas in the fields of media, and addressed a number of themes in years of building the Emirate of Sharjah.