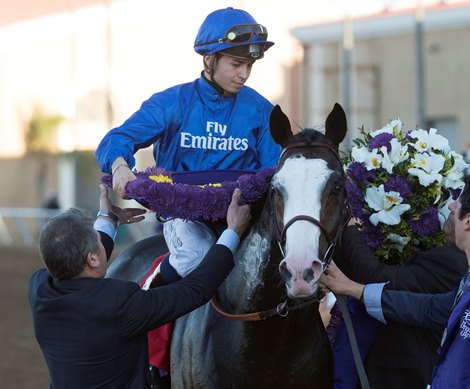 Godolphin’s Talismanic, winner of the Longines Breeders’ Cup Turf (G1T) Nov. 4, may test dirt for the first time in some of the deepest of waters.

The flashy son of Medaglia d’Oro  is being pointed for the $10 million Dubai World Cup Sponsored by Emirates Airline (G1), according to Godolphin officials.


“Talismanic is on course for the Dubai World Cup,” said Lisa-Jane Graffard, who looks after Godolphin’s racing interests in France. “(Trainer) André Fabre suggested it after he came back from the Breeders’ Cup as a potential long-range target. The horse has wintered really well and looks in great condition. He appears to have fully recovered from his trips to Del Mar and Hong Kong.

“The (Dubai World Cup) is the target for him now as the horse appears to have some aptitudes which would suggest it’s worth trying him on dirt,” Graffard continued, noting that while it was just steady work at Del Mar he showed a very easy action. “He’s also a horse who is easy to place in his races and can lie up with the pace and is by a top-class dirt stallion. He has an excellent temperament and is a good traveler, adapting to different situations easily. It’s a big step into the unknown, but André Fabre is very talented at pinpointing objectives that might not seem obvious to anyone else.”

The 5-year-old Talismanic has six wins and has finished in the top three in 13 of 17 lifetime starts, including a victory in the 2017 Prix Maurice de Nieul (G2). It was not until the latter half of his 4-year-old season that the world saw the true potential of the hard-trying horse as he went on to capture the Breeders’ Cup Turf over the likes of defending race winner Highland Reel before running second to that rival in the Longines Hong Kong Vase (G1) in December.

Dubai prep plans for Talismanic are yet to be decided.

“Plans are still up in the air and André will decide based on how far along he can get prepping Talismanic at home in Chantilly,” Graffard said. “He could go to Dubai for a prep on Super Saturday (March 10), or he could stay at home for the Chantilly preps on March 6. Nothing has been confirmed as yet.”