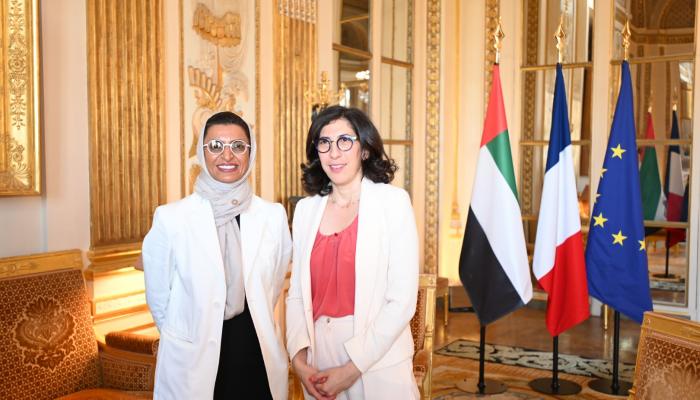 This happened on the sidelines of a state visit by Sheikh Mohamed bin Zayed Al Nahyan, President of the United Arab Emirates, to the French Republic.

The meeting, held at the French Ministry of Culture’s headquarters, discussed aspects of cultural cooperation between the United Arab Emirates and the French Republic and ways to reconcile visions and trends in cultural affairs and coordinate work through relevant international organizations, as well as discuss the future of cultural relations, and the importance of creative and cultural cooperation between the two countries.

The two sides touched on a number of areas of cooperation, in particular the cultural and creative industries that support the economy and local production.

Al Kaabi told the Emirates News Agency, WAM: “The United Arab Emirates and the French Republic have close relations, supported by historical ties and common hopes and ambitions in various fields, in particular cultural cooperation, which forms the center of these relations. Both countries are eager to strengthen partnership and cooperation frameworks and open new and wide horizons to support and develop different cultural sectors and other areas that positively reflect the relationships that bring them together. ”

She added: “The cultural relations between the United Arab Emirates and France have become a remarkable model for optimal cultural exchange between countries and an example of effective civilized interaction between them. And at an accelerated pace, according to the directives of the leadership of both countries .

The meeting comes on the sidelines of a “state visit” by Sheikh Mohamed bin Zayed Al Nahyan, President of the United Arab Emirates, to the Republic of France, as his first official international destination since taking over the presidency.

This visit reflects the extent of the relations that bind the two countries as strategic partners in many common issues that serve the prosperity and stability of the peoples.