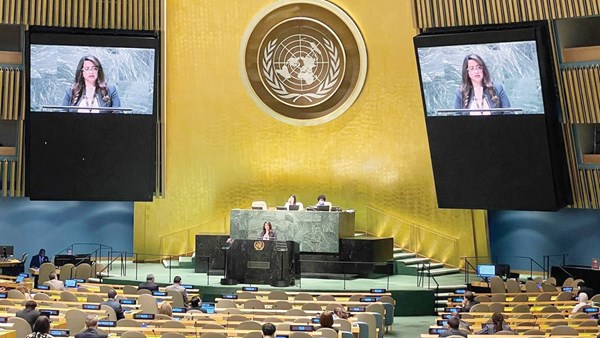 Yesterday, the United Arab Emirates called on UN member states to continue to focus on the Syrian issue in all its aspects in the long term to achieve stability, prosperity and peace for the fraternal Syrian people and end the humanitarian crisis.
In this context, it urged the UAE to focus on the humanitarian necessity of this file and not to politicize it, taking into account the needs of all Syrians before other considerations when discussing the decision on the cross-border aid delivery mechanism in January next year. .
In a statement before the General Assembly at the 76th session under the item “Strengthening the UN System”, the State welcomed the adoption of Security Council Resolution No. 2642 as a compromise solution.
The UN Security Council passed Resolution 2642 on July 12, extending the UN’s mandate to bring cross-border aid to Syria for just six months.
The decision came after intense negotiations, where the main point of contention was “the length of the mechanism’s mandate.”
According to the statement of the spokeswoman of the United Arab Emirates delegation to the United Nations, Shahd Matar, “The United Arab Emirates participated in the negotiations in a constructive way, as the ten elected members took a united position in their commitment to implement the mandate of the Council. , as this carefully worded resolution reflects the Council’s eagerness to respond to humanitarian needs and ensure that emergency aid reaches all those in need in all parts of Syria and by all means.
Matar said: “Despite our desire to extend the mechanism for a period of twelve months, the decision contained important additions that provide the basis for dealing with the humanitarian situation in the long term and on a larger scale, such as intensifying early recovery efforts. projects which include providing electricity to Syrians, where electricity is one of the basic humanitarian needs, which cannot be dispensed with, without which basic services would be disrupted, especially in hospitals and schools, and efforts to provide water to millions of Syrians would be inhibited.”
She expressed the UAE’s appreciation for holding this meeting within the framework of the mechanism established by General Assembly Resolution No. 262/76, which aims to increase transparency in the work of the Security Council, which works on behalf of all members of the United States Nations.
In a speech to the Security Council, following the adoption of the resolution on 12 July, the United Arab Emirates stressed the need for the international community to continue its efforts to alleviate the suffering of the Syrian people and ensure the provision of all basic services to them, including through the intensification of early recovery projects to reflect the urgent needs on the ground. , especially with the worsening food and health crises around the world.
She expressed her hope that this momentum will be built on, especially next January, to achieve stability, prosperity and peace for the brotherly Syrian people in particular and the Arab world in general.

The UAE is a regional leader in artificial intelligence