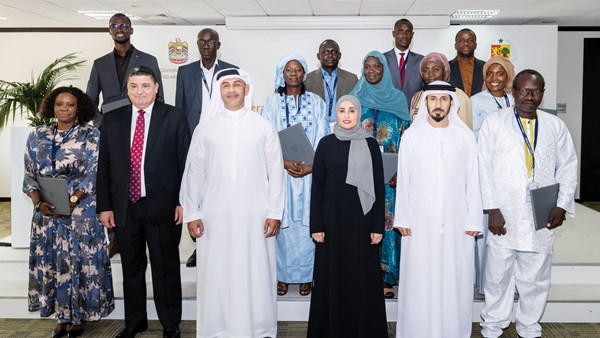 The UAE government, in collaboration with the Mohammed bin Rashid School of Government, held a series of training workshops for government leaders in the Republic of Senegal, entitled “Government of the Future”, within the framework of the Memorandum of Understanding for bilateral cooperation in the areas of governmental modernization and development. Her Excellency Ohoud bint Khalfan Al Roumi, Minister of State Development and Future, honored the participants of the training workshops in the presence of Abdullah Nasser Lootah, Director General of the Prime Minister’s Office in the Ministry of Cabinet Affairs, and Dr. Ali bin Sebaa Al Marri, Executive Director of the Mohammed bin Rashid College of Government Administration.
The bilateral cooperation witnessed the organization of more than 80 workshops and the training of more than 4,000 Senegalese trainees through more than 14,000 working hours within the cooperation memorandum covering several axes, including “government services, the award for the best public services application , government expertise, government accelerators and performance.” government, leadership, government capacity building, programming, government strategy and government innovation.” The workshops, which were overseen by the UAE Government Leaders Program and the Mohammed bin Rashid School of Government, focused on building the capacity of Senegalese leaders in the areas of leadership and management of institutions, public policies , digital transformation in government, public services, the role of international organizations’ programs and competitiveness reports in the development of economic policy A number of Senegalese government leaders in the ministries of the interior, health, social work, justice, finance and budget, public service and public service modernization , Education, Manpower, Vocational Training and Integration, Judicial Training Center and National School of Government Administration participated in it.
Abdullah Nasser Lootah emphasized the UAE government’s eagerness to strengthen its constructive global partnerships in government modernization, which would help strengthen future governments.
Dr. Ali bin Sebaa Al-Marri, for his part, said that the Mohammed bin Rashid School of Government, in collaboration with the UAE government, constantly seeks to use its skills and expertise to support and strengthen the work systems of various governments in the region and the world based on the best experiences from the UAE model of modernization and government development, which has proven its effectiveness in dealing with various global changes, keeping pace with technological developments and anticipating the future.

Cooperation between the Zayed Higher Organization and the Czech hospital