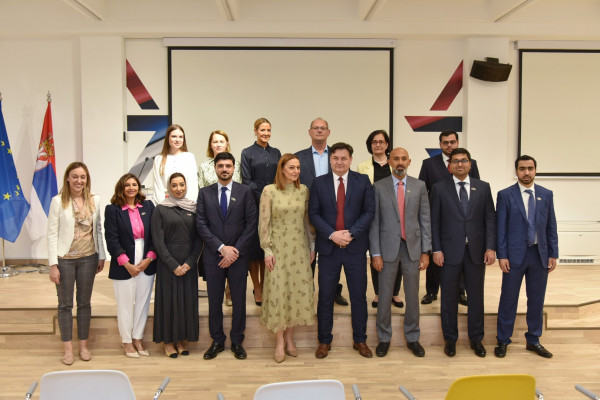 DUBAI, 31st May, 2022 (WAM) — During an official visit to Serbia, a delegation from the UAE Government held several meetings, workshops and tours as part of a bilateral cooperation agreement between the two governments, which was recently signed in Dubai, with the attendance of H.H. Sheikh Maktoum bin Mohammed bin Rashid Al Maktoum, Deputy Ruler of Dubai, Deputy Prime Minister, Minister of Finance.

The visit aims to promote the exchange of knowledge, expertise and successful experiences in government services and Artificial Intelligence (AI), as well as build the capacities of government buildings and employees.

The Emirati delegation included Mohammed bin Taliah, Chief of Government Services of the UAE Government; Dr. Yasir Al Naqbi, Assistant Director General for Leadership and Government Capabilities at the Prime Minister’s Office at the Ministry of Cabinet Affairs; Saqr bin Ghalib, Executive Director of the Artificial Intelligence Office of the UAE Government; and Salem Al Shaami, Director of the Department of Government Services Development of the Cabinet Office at the Ministry of Cabinet Affairs.

Strengthening international cooperation and partnerships in development and modernisation is key to the advancement of governments and maintaining their resilience and readiness for the future, he added.

The delegation held meetings to discuss the UAE Government’s cooperation with its Serbian counterpart, with a focus on digital services.

The two sides also held a work meeting to share the experiences of their governments in creating a smart government and improving smart services, as well as to discuss related initiatives, such as the UAE Government’s accelerators and the digital transformation of its services.

On 12th May, 2022, Sheikh Maktoum witnessed the signing of a bilateral cooperation agreement in government modernisation between the two countries signed by Mohammad bin Abdullah Al Gergawi, Minister of Cabinet Affairs, and Ana Brnabić, Prime Minister of Serbia.