UAE guest of honour at 15th Energy Conference in Rabat 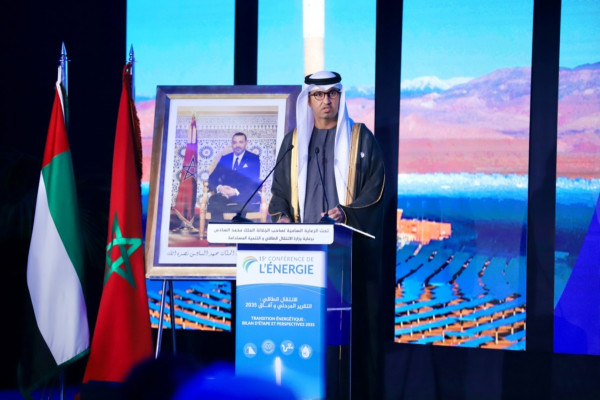 RABAT, 14th March, 2022 (WAM) — Dr. Sultan bin Ahmed Al Jaber, Minister of Industry and Advanced Technology and Special Envoy for Climate Change, stressed the deep-rooted relations between the UAE and the Kingdom of Morocco and noted the UAE’s wise leadership is keen to strengthen the relationship between the two countries, particularly across the energy sector.

The remarks were made in a keynote speech by Dr. Al Jaber during the opening session of the 15th Energy Conference, which was held in Rabat, the Moroccan capital, under the patronage of His Majesty King Mohammed VI, King of the Kingdom of Morocco. The UAE was the guest of honour at the conference.

During his remarks, Dr. Al Jaber conveyed the greetings of the UAE leadership and its people to the Kingdom and wished them continued progress and development.

“The UAE is very pleased to be a guest of honour at the 15th Energy Conference. We are proud of the strong UAE-Morocco relations, whose pillars were laid by the UAE’s Founding Father, the late Sheikh Zayed bin Sultan Al Nahyan, and his brother, the late King Hassan II,” he said.

Dr. Al Jaber reflected on the current state of global energy markets and stressed markets remain at risk from under supply as a result of long-term under-investment in hydrocarbons.

Citing a recent report by the International Energy Forum, Dr. Al Jaber noted that global expenditure on oil and gas projects has slumped 30 percent to US$309 billion in 2020 and had only recovered slightly in 2021. He cautioned that unless more investments are injected into the oil and gas sector, the world risks a supply crunch in the coming years.

Dr. Al Jaber added that the UAE is committed to its role as a responsible and reliable global energy provider, and the country will continue to invest in developing its crude oil production capacity while focusing on reducing emissions.

On the energy transition, he stressed it will take time and we should always remember that the goal is to hold back emissions and to achieve sustainable development, and not to reduce growth rate and prosperity.

“If there is one thing that the history of every energy transition tells us, it is that they take time. You cannot simply flip a switch. The fact is the world will continue to rely on oil and gas for decades to come.

“So, we must continue to invest to create a viable diversified mix of energy sources, including solar, wind, hydro and peaceful nuclear energy, as well as the least carbon intensive hydrocarbons. This is our approach in the UAE,” he added.

Dr. Al Jaber went on to explain that the UAE views the energy transition as an opportunity to transform and diversify its economy. He pointed out that the country began investing in renewable energy over 15 years ago, through the Abu Dhabi Future Energy Company (Masdar).

Masdar has so far invested in solar and wind energy projects in 40 countries around the world including in Morocco.

“Here in the Kingdom of Morocco, Masdar, in partnership with the National Office of Electricity and Drinking Water, has set up a landmark Solar Home System Project to provide energy to nearly 20,000 homes in more than 1,000 rural towns across Morocco. We are also keen to develop the Noor Midelt solar power plant, with a total installed capacity of 800MW.

“These projects represent a solid platform the UAE and Morocco can build on as Masdar expands its global renewable energy capacity under the wise guidance of His Highness Sheikh Mohamed bin Zayed Al Nahyan, Crown Prince of Abu Dhabi and Deputy Supreme Commander of the UAE Armed Forces,” he said.

Sharing his perspectives on the UAE’s approach to COP28, the UN Climate Change Conference which is set to take place in Abu Dhabi in 2023, Dr. Al Jaber said the UAE is looking forward to working with the international community to make COP28 as inclusive and action-oriented as possible to deliver tangible solutions on climate change.

“We will work closely with the Arab Republic of Egypt, which is hosting the COP27 Conference this year. We also look forward to consulting with the Kingdom of Morocco, building on its experience in climate action, especially as it hosted the COP22 conference in 2016 in Marrakesh. Both our countries are pioneers in renewable energy, with the Kingdom providing nearly 40 percent of its electricity needs from renewable energy.”

Commenting on investment opportunities between both countries, Dr. Al Jaber highlighted that the UAE has the highest volume of foreign investment in Morocco since 1976 among Arab countries, with over AED20 billion invested in the country across various sectors. The Abu Dhabi Fund for Development has also financed 82 development projects in Morocco with a total value of approximately US$2.45 billion.

Dr. Al Jaber urged the public and private sectors in Morocco to strengthen existing partnerships with their counterparts in the UAE, and to explore further opportunities for cooperation in new areas.

Other speakers at the conference included Patricia Lombar Cusack, Ambassador of the European Union to Morocco; Ashraf Tarsem, Director of the African Development Bank in Morocco; and Abdellatif Bardach, President National Electricity Regulatory Authority of Morocco.

The 15th Energy Congress is organised by the Energy Union of Morocco under the theme “Energy Transition: The achievements Report and Vision 2035” and supported by Morocco’s Ministry of Energy Transition and Sustainable Development.