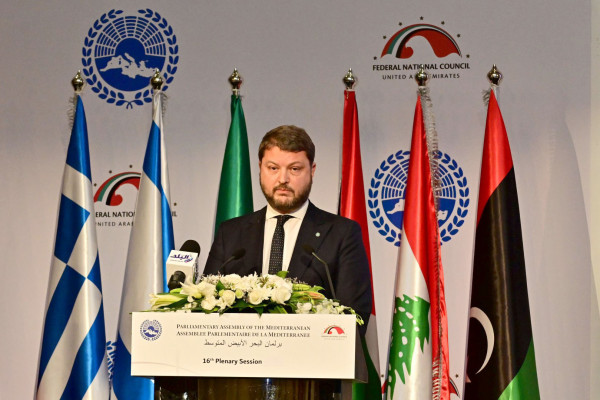 ABU DHABI, 9th March, 2022 (WAM) – The “3rd Standing Committee on Dialogue among Civilisations and Human Rights,” hosted by the UAE as part of the 16th General Assembly meeting of the Parliamentary Assembly of the Mediterranean (PAM), approved two draft resolutions on good labour practices and migration.

The committee’s meeting was chaired by Gennaro Migliore, President of PAM, with the participation of Dr. Mohamed Mokhtar Gomaa, Egyptian Awqaf Minister; Mohamed Abou el-Enein, Deputy Speaker of the Egyptian House of Representatives; Dherar Hamid Belhoul Al Falasi, Member of the Federal National Council (FNC) and Vice President of the Parliamentary Division Group of the Mediterranean Parliament; Kristina Mejo, Deputy Regional Director of the International Organisation for Migration for the Middle East and North Africa, and Khaled Khalifa, Senior Adviser to the Commission the United Nations High Commissioner for Refugees.

In his speech, Dr. Gomaa said that dialogue requires people to treat others the way they wish to be treated, which is equivalent to establishing understanding between institutions and negotiations between states, noting that a wise dialogue requires all parties to denounce violence, hatred, extremism and terrorism.

He also highlighted the importance of promoting the culture of peace and making it a universal culture, so the world’s people can engage in reinforcing this culture, regardless of their religion and culture.

Al Falasi said terrorism is an idea and culture that threatens the logical balance of human values and, therefore, tests everyone’s humanity and willingness to defend common values and prevent violence.

He then pointed out that the suffering of people caused by wars and conflicts in the Middle East and Mediterranean countries was exacerbated by the COVID-19 pandemic, noting that this could lead to increased violations against children, such as kidnappings, recruitment for war and sexual exploitation, in addition to attacks on schools and hospitals in Yemen.

“Under this framework, I call upon the international community, parliamentarians and governments in the Mediterranean to list the Houthi militias as a terrorist organisation, to save Yemeni children and women,” he stressed.

Sandrine Mörch, Chair of the Committee, presented the association’s activities since the previous general assembly meeting, noting that during the past months, the focus has been on migration and health.

“Last year, there were more than 1,500 people who died in the Mediterranean, in addition to the migration of hundreds of thousands to Europe, and about 20,000 to the east,” she added, highlighting the fact that the responsibility of host countries, source countries and transitional countries have doubled, stressing they play the three roles at the same time.

Mohamed el-Enein expressed his happiness at participating in the meeting, which is taking place in the UAE and has a special place for all Egyptians.

“Our meeting today is taking place amidst exceptional conditions and unprecedented political, economic and humanitarian conditions,” he said, noting that the world is overcoming the pandemic after a long period of suffering, which has impacted the global economy, and adding that the world is now facing new crises and wars.

Kristina Mejo said the Global Compact for Migration was reviewed in anticipation of the International Migration Review Forum to be held in May, noting that the world has seen concrete steps and initiatives, to adopt and implement national migration policies and establish immigration mechanisms.

Under this framework, she highlighted the key role of parliaments in helping countries establish systems to address illegal situations, noting that there is a need to set legal frameworks that are in line with international conventions.

She also noted that the previous period has witnessed many changes that led towards integrating refugees in their host communities during the pandemic, which should continue during the recovery phase.

Khalifa said PAM’s 16th General Assembly meeting highlights the issue facing refugees, and there must be collective action to help over 86 million people who were forced to leave their homes, with many of them arriving in Europe after dangerous journeys in the Mediterranean.

“The number of refugees who arrived in Italy, Greece and Malta this year amounted to more than 13,000, and it is hard to accurately locate them because the information collection process is not sufficiently accurate,” he added