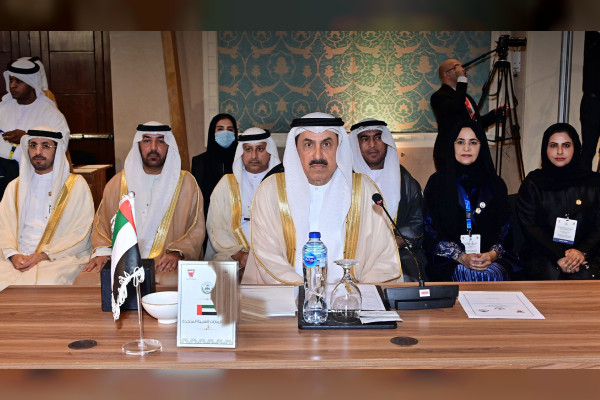 CAIRO, 21st May, 2022 (WAM) — Saqr Ghobash, Speaker of the Federal National Council, has affirmed that the Palestinian cause has always been at the heart of the foreign policy priorities of the United Arab Emirates since its establishment, and that the UAE, politically and diplomatically, stood shoulder to shoulder with sisterly countries against all Israeli measures and decisions that have aimed to obliterate or change the identity of Al-Aqsa Mosque and the legal and historical status quo of Jerusalem, and its Arab and Islamic identity.

He added that the UAE has left no stone unturned to defend the rights of the Palestinian people, especially their right to self-determination and the establishment of their independent state.

“The Palestinian cause had been on top of the priorities of the Founding Father, late Sheikh Zayed bin Sultan Al Nahyan, and the Sheikh Khalifa bin Zayed Al Nahyan, and continues to be on the list of President His Highness Sheikh Mohamed bin Zayed Al Nahyan’s concerns as is the case with all other Arab issues which lie at the heart of his interests. It will remain in the annals of history that our nation, its leadership and people, has always been in support of the Palestinian people and its just cause under all circumstances and conditions,” Ghobash said at the beginning of his speech before the 33rd emergency conference of the Arab Inter-Parliamentary Union, which was held in Cairo today.

Ghobash thanked all the participating delegations for their immediate response to the emergency conference. “I have the honor to convey to our brotherly Palestinian people the sincere feelings of the leadership and people of the United Arab Emirates, and their full solidarity with them, to restore all their legitimate rights and establish their independent Palestinian state on the borders of June 4, 1967, with East Jerusalem as its capital.”

He added, “I’m positive and full of hope and confidence that we will come up with a strong and unified position that will boost the aspirations of the Arab peoples regarding the first and foremost issue of the Arab world -which is the Palestinian cause- especially toward the recent attacks that violated the sanctity of the blessed Al-Aqsa Mosque, which the UAE immediately condemned once they occurred, and demanded immediate cessation thereof, and respect for the inalienable rights of the Palestinians to perform their prayers and practice their religious rituals.

“I am confident that we all are keen on ensuring all transparency and frankness to stop and prevent Israeli practices that lead to grave escalations and threaten the security of the entire region. I’m also confident that we all are aware that temporary solutions will not achieve tangible results that can be relied on during the coming period. Therefore, we must adhere to the mechanisms of forging a permanent, just, and comprehensive solution to the Palestinian issue in accordance with the three main approaches represented in the internationally-agreed references, the Arab Peace Initiative, and the return to the borders of June 4, 1967, so that the Palestinian people can establish their independent state on their soil with East Jerusalem as its capital,” he concluded.