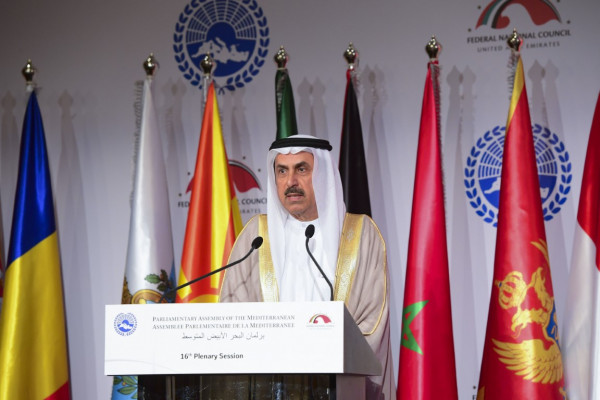 He was also confident that the country’s PAM membership would boost the strategic partnerships between the UAE and Mediterranean countries and support their joint efforts to address regional and international challenges that threaten global peace and security.

Ghobash made this statement during the PAM’s 16th General Assembly meeting hosted by the UAE.

During the meeting, Gennaro Migliore, President of PAM, announced the permanent membership of the UAE.

Ghobash said the FNC Parliamentary Division will work hard to achieve PAM’s objectives and promote joint parliamentary action to achieve the aspirations of Arab and European countries as stated in the Barcelona Declaration in 2010.

Migliore welcomed the UAE’s membership and lauded its parliamentary diplomacy work, noting that the FNC has contributed to all discussions and initiatives related to combatting terrorism and extremism, in addition to humanitarian and energy transition efforts.

The Parliamentary Assembly of the Mediterranean opened its 16th Plenary Session in Dubai yesterday, in the presence of 120 participants representing parliaments, governments, governmental and civil organizations.