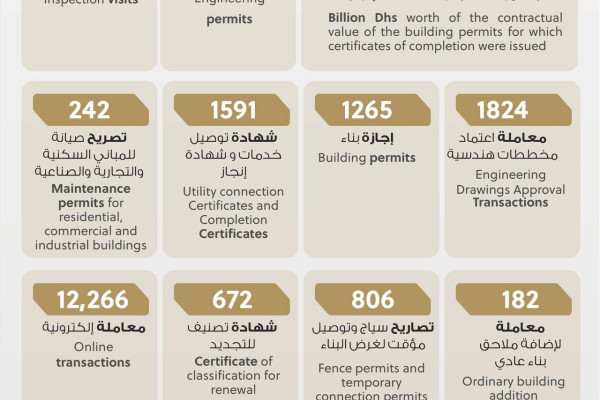 SHARJAH, 21st September, 2022 (WAM) — Sharjah Municipality announced that the contractual value of building permits in Sharjah during the first half of this year has grown to AED9.344 billion , while the contractual value of building permits for which certificates of completion were issued amounted to about AED3.263 billion, which reflects the great role of the emirate in attracting investors.

Obaid Saeed Al Tunaiji, Director General of Sharjah Municipality, confirmed that the smiling emirate is a model to be emulated worldwide in the visions and directions of His Highness Sheikh Dr. Sultan bin Muhammad Al Qasimi, Member of the Supreme Council and Ruler of Sharjah, and his unlimited support to enhance the emirate’s position globally.

He stated that the engineering and buildings sector achieved many achievements during the first half of this year in various fields, including those related to the development of infrastructure and services, which contributed to the high rate of engineering growth in the emirate, as 10,650 engineering permits were issued, and more than 37,721 inspection visits were organised for various areas of Sharjah city, and the transactions submitted online reached 12,266 transactions during the first half of this year.

The Director General of Sharjah Municipality indicated that the municipality is working through the engineering and buildings sector to update and develop construction and building standards on an ongoing basis to keep pace with the urban and population boom in the emirate and in line with international standards, to achieve the visions and directions of the emirate in enhancing its role as an investment destination that provides great services and facilities to investors.

‘Make it in the Emirates’ draws interest from American companies at GMIS...