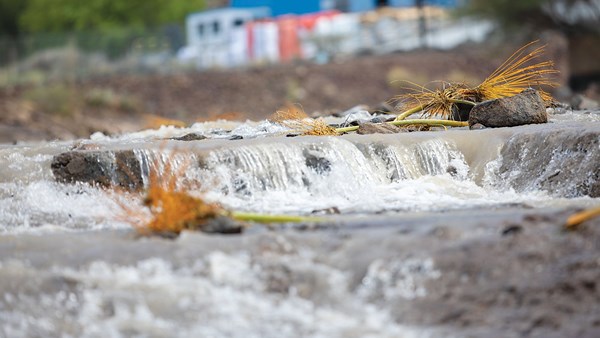 Rain of varying intensity, ranging from light, medium and heavy, fell on areas of the country and heavy rain fell on the city of Al Ain. In the afternoon, it extends over some inland and southern areas, and from southeast to northeast to light to moderate speed, active and sometimes strong wind with clouds, exciting for dust and dust, and its speed is from 20 to 30 km/h up to 60 km/h and the sea is light in the Arabian Gulf In the Sea of ​​Oman.
Yesterday there was a possibility of cumulus clouds forming accompanied by rain and active, fast and sometimes strong winds causing dust and dust, leading to a decrease in horizontal visibility.
The National Center of Meteorology urged caution and caution during heavy downpours and strong winds falling from convective clouds in some eastern regions, leading to flying solid objects and low horizontal visibility.
The weather situation that started last Tuesday and ends today, according to the report of the National Center of Meteorology, as a result of the oscillating movement of the Tropical Convergence Line (ITCZ), which moves towards the northern part of the Arabian Peninsula and then retreats to the south, has led to the advancement of surface and upper depressions from south to north, and the flow of air masses The humid area from the Arabian Sea and the Sea of ​​Oman towards the region and the country, which witnessed high temperatures during the day and the formation of local convective rain clouds over different regions of the country, especially in the east and south, and also extending to the Al Dhafra region, accompanied by lightning and thunder sometimes.
According to the National Center of Meteorology, the climate in the current month of August is affected by the extension of the Indian monsoon, as well as thermal depressions from the southwest, which lead to a noticeable increase in temperature Eastern mountains and high temperatures. Cumulus clouds develop in the afternoon and then move inland. Some areas of the country are affected during this month, especially in the first half of it, by the extension of the Intertropical Convergence Line (ITCZ), which is accompanied by the formation of Cumulus rainy over sporadic areas, especially the southern and some western areas.