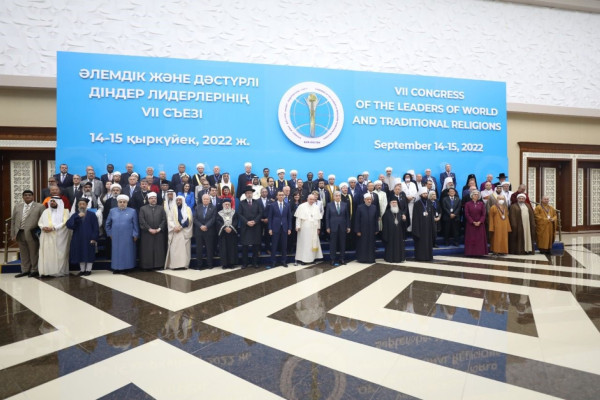 NUR-SULTAN, 15th September, 2022 (WAM) — The world religious leaders today adopted the Human Fraternity Document signed by His Eminence the Grand Imam of Al Azhar and Chairman of the Muslim Council of Elders, Dr. Ahmed el-Tayyeb, and His Holiness Pope Francis of the Catholic Church, in Abu Dhabi in 2019.

This came during the 7th Congress of Leaders of World and Traditional Religions which concluded on Thursday.

The closing statement of the congress, which was attended by over 108 religious and world leaders, underscored the historical significance of the Human Fraternity Document, stressing that it helps promote peace, dialogue and mutual respect among people.

Held on 14th and 15th September at the Kazakh capital, Nur-Sultan, under the title “The Role of the Leaders of World and Traditional Religions in the Spiritual and Social Development of Human Civilisation in the Post-Pandemic Period”, the event saw the participation of Kassym-Jomart Tokayev, President of Kazakhstan, Dr. Ahmed el-Tayyeb and Pope Francis.