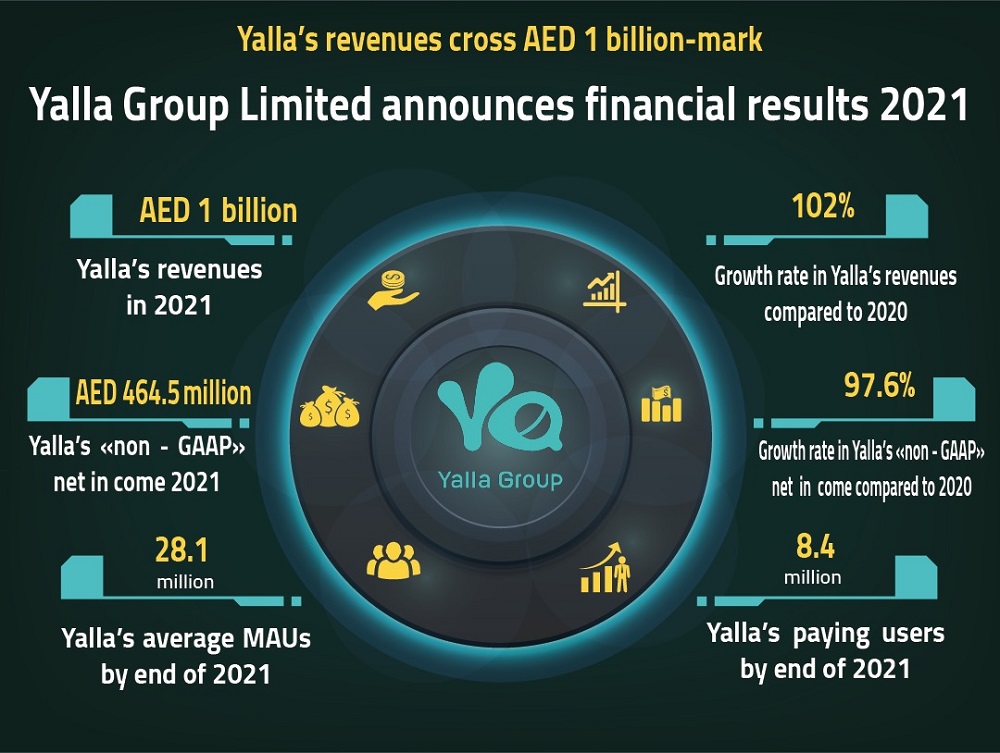 Dubai : Yalla Group Limited (“Yalla” or the “Company”) (NYSE: YALA), the leading voice-centric social networking and entertainment platform in the Middle East and North Africa (MENA), has announced its fourth-quarter and full-year earnings for the fiscal year ending on December 31, 2021.

According to the yearly financial results, Yalla has achieved a record growth in revenues hitting AED 1 billion, an increase of 102.4% compared to the fiscal year 2020. The group also recorded an annual non-GAAP net income of AED 464.57 million, a growth rate of 97.7% compared to 2020, in which the net income amounted to AED 235 million.

Commenting on the strong financial results achieved by the group, Tao Yang, Founder, Chairman and Chief Executive Officer of Yalla Group Limited, said that 2021 marked a remarkable year for Yalla to elevate the diversity of businesses and services to new heights. “As always, we strive to broaden our product range through diverse developments, investments and collaborations devoted to fulfilling MENA users’ evolving online social networking and entertainment needs,” Yang added.

For his part, President of the Group Mr. Saifi Ismail commended the outstanding financial results achieved by the company saying: “2021 was an important year for Yalla Group. We continued to roll out products that are tailored to MENA users’ needs and diversify the services and businesses that Yalla covers. Operationally, the growth momentum continues as we expand our user community and advance our monetization capabilities. We are pleased to report a solid fourth quarter where Yalla Group’s total revenue increased by almost 39.7% YoY and reached AED 248.2 million in 4Q.

Ismail stressed that Yalla Group aspires to become the No. 1 online social networking and entertainment platform in the MENA region, and this vision never changes. “We will keep in mind our core values of prioritizing our users, embracing diversity, and operating with a simple, pragmatic, pioneering and enterprising approach as we work to achieve our goals,” he noted.