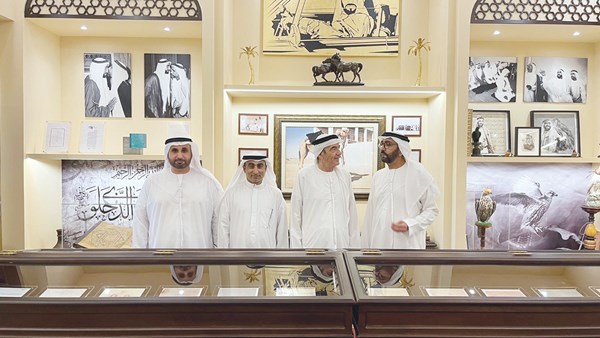 His Excellency Zaki Anwar Nusseibeh, Cultural Adviser to His Highness the President of the UAE and Supreme President of the United Arab Emirates University, visited Mohammed Ahmed Al Mahmoud’s home in the Al Towaya area of ​​Al Ain, accompanied by Dr. Ahmed Murad, Associate Deputy for Scientific Research Affairs and Khalfan Al Dhaheri, Acting Secretary General.
Nusseibeh toured with the accompanying delegation inside the house, which turned into a unique museum, enriched with its historical contents and heritage collectibles that carry with it the rich, immortal Emirati history, stressing that the preservation of the Emirati people’s heritage, civilization and cultural holdings. highlights their unique identity and motivates future generations to follow in their footsteps by preserving their national identity and pride in belonging to the motherland. Nusseibeh and his accompanying delegation also discussed during the visit ways of collaborating with UAE University in the field of culture and heritage, which are in line with the vision of our wise leadership and enhance the spirit of solidarity among members of the state’s society.
The Mahmoud Museum included a valuable heritage collection that includes photos and possessions of his father, Ahmed bin Mohammed Al Mahmoud, who was secretary to the late Sheikh Zayed bin Sultan Al Nahyan, may he rest in peace, including documents, correspondence and clippings, out over his private photos and a large group of memorabilia representing the era of his work as ambassador. For the Emiratis in some countries of the world, the museum also houses a collection of old telephones, phonographs, collectibles and exhibits that constitute a national wealth and heritage for future generations.