Zaki Nusseibeh: The UAE supports retirees in all sectors 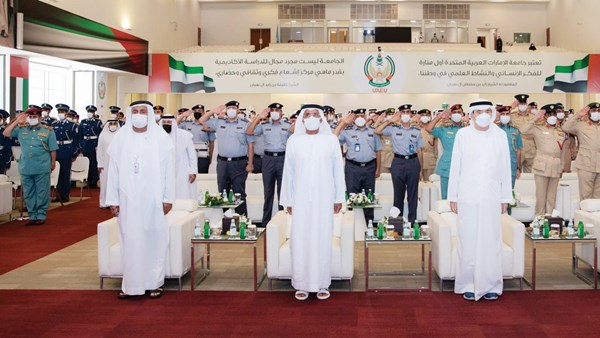 His Excellency Zaki Anwar Nusseibeh, Cultural Adviser to His Highness the State President and Supreme President of the United Arab Emirates University, affirmed that the UAE policy, thanks to the directives of our wise leadership, has changed the concept of pension and turned it into serious work at the state level by supporting retirees in all sectors to continue their career path, each in accordance with his vision and personal interests to achieve his ambitions
This happened during the activities of the Retirement Forum, which was held in partnership between the Ministry of Interior and the UAE University, in the presence of Major General Khalifa Hareb Al Khaili, Undersecretary of the Ministry of Interior, and a number of senior officials and leaders of the two sides at the university campus in Al Ain, and with the participation of a number of experts and speakers who reviewed the experiences and components of the pension phase across four main axes.
His Excellency added: “In the UAE, the wise leadership has provided all means of care and a decent life for retirees to enable them to start a new life, giving them opportunities to work freely in trade and their own productive projects so that the pensioner can continue his role in giving without feeling that he is no longer an active person in society.
His Excellency also emphasized that “retirement is an opportunity for a person to contribute to voluntary work, as well as an opportunity for social communication and a great advantage for travel and roaming and getting to know the civilizations and cultures of the world.”
For his part, retired Major General Saeed Al Hanaki, former Director General of Finance and Support Services in the Ministry of Interior, presented a working paper modeled on the system of His Highness Sheikh Mohammed bin Rashid Al Maktoum, Vice President, Prime Minister. Minister and Ruler of Dubai, who seeks to: Provide a well-studied scientific methodology for the competencies and leadership skills required for the next phase of the growth and prosperity process, indicating the importance of building and managing global perspectives, understanding the dynamics and complexities, and influence the local, regional and global business community, with the aim of maintaining the strategic position, and deepening that vision by focusing on axes. Several depend on continuing the educational process to crystallize skills and gain experience.
Media consultant and entrepreneur Hazza Al Mansouri also spoke about how to retire safely as he touched on several points, including the challenges for retirees, setting goals for post-retirement and steps to establishing their own projects.
Meanwhile, Muhammad Ahmed Saqr Al Hammadi, Director of the Pension Operations Department of the General Pension and Social Security Authority, spoke on pension standards, the policy system and termination gratuity in relation to retirement.
At the end of the forum, the organizers and speakers were honored by His Excellency Zaki Nusseibeh, Supreme President of the University, and Major General Khalifa Hareb Al Khaili, Undersecretary of the Ministry of Interior.