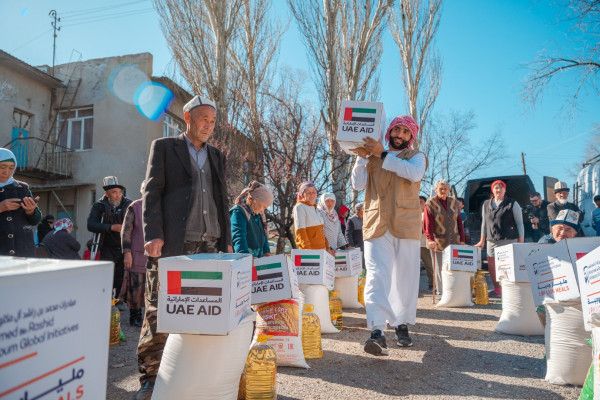 DUBAI, 7th April, 2022 (WAM) — The 1 Billion Meals initiative, which aims to provide food support to the underprivileged and undernourished in 50 countries around the world, announced that it has started distributing foodstuffs, food parcels in Lebanon, India, Jordan, Tajikistan and Kyrgyzstan.

The initiative, which was launched at the beginning of the Holy Month of Ramadan and organised by the Mohammed bin Rashid Al Maktoum Global Initiatives (MBRGI), has started distribution in the four countries in cooperation with the Food Banking Regional Network (FBRN), the Mohammed bin Rashid Al Maktoum Humanitarian and Charity Establishment (MBRCH).

Accurate Databases The 1 Billion Meals initiative provides beneficiaries with basic necessities needed for the preparation of nutritious meals or instant electronic vouchers for food supplies in cooperation with relevant local authorities in beneficiary countries. This coordination ensures the efficiency of distribution operations and, by taking advantage of technology applications, also provides direct access to the communities most in need based on comprehensive and accurate databases.

Donations Continue The distribution of food parcels coincides with the arrival of contributions and donations to the 1 Billion Meals initiative from individuals, institutions, companies, businessmen and pioneers of charity and humanitarian work. These donations embody the values of the UAE and its generous society, which is keen to express solidarity with those in need without discrimination between race, religion or geographical region.

Donation Channels Donors can contribute to the 1 Billion Meals campaign through the following donation channels – the campaign’s official website: www.1billionmeals.ae; bank transfer to the campaign’s account at Emirates NBD, number: AE300260001015333439802. Donors can also opt to donate AED1 a day through a monthly subscription by sending “Meal” or “وجبة” via SMS to 1020 on the du network or 1110 on the Etisalat network. Donations can also be made through campaign’s call centre via a toll-free number 8009999.

Humanitarian Goals The launch of the 1 Billion Meals initiative and the start of its distribution operations are part of the message of MBRGI, whose humanitarian goals are based on giving without any exception on the basis of gender, race, belief or region. The initiative falls under the pillar of Humanitarian Aid and Relief, one of the five main themes focused on by MBRGI.