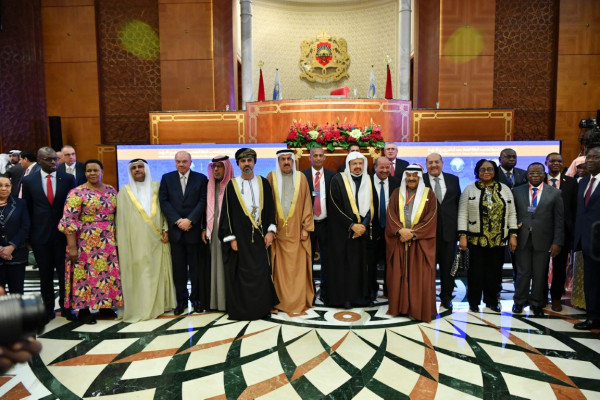 RABAT, 5th March, 2022 (WAM) — The 11th Conference of the Association of Senates, Shoora and Equivalent Councils of Africa and the Arab World (ASSECAA), held Thursday at the headquarters of the House of Advisors (Moroccan parliament’s upper house), expressed its consideration for “the role and leadership of His Majesty King Mohammed VI in building a civilisational dynamic of cooperation, co-development and strengthening of strategic security in Africa and the Arab World”.

In a Final Declaration, the delegations participating in the Congress expressed their “great pride in the royal patronage of the work and activities of the Congress, as well as the role played by the Speaker of the House of Advisors, President of ASSECAA, Naama Mayara, who gave a new impetus to the work of the Association and helped to capitalise on the important achievements it had made over twenty years”.

The ASSECAA Congress stressed that the Rabat edition, which coincided with the 20th anniversary of the Association’s establishment, constitutes a “historic opportunity to inaugurate a new phase of actions to promote common Arab-African interests and implement a new generation of parliamentary initiatives aimed at strengthening joint cooperation and economic integration and contributing concretely to the realisation of our peoples’ aspirations for a dignified life, well-being, prosperity, peace and security”.

The Final Declaration contains numerous decisions and recommendations focusing on the importance of boosting cooperation in various fields between the Arab and African regions, especially in the areas of development, economy and trade, and working to remove obstacles that prevent the expansion of cooperation horizons, including customs and mobility barriers.

In this context, the conference called on Arab and African countries to promote air, sea and land transport to facilitate the mobility of people, goods and services between the countries of the two regions.

The 11th ASSECAA Congress also stressed the consolidation of the two-chamber system, which broadens the basis of participation in decision-making and ensures the effectiveness of legislation, its relevance and conformity with reality, noting that the post-COVID-19 era requires the emergence of a new generation of cooperation initiatives aimed at serving the interests of the peoples of the African continent and the Arab world.

In this regard, the Congress called for reforming the “Covax” system to better meet the needs of African and Arab countries for vaccines against COVID-19 and to accelerate the strengthening of herd immunity against its variants, as well as to strengthen the mechanisms for socio-economic recovery.

On the economic front, the Congress stressed the importance of strengthening mechanisms for Arab-African financial cooperation, establishing investment funds to encourage co-location of industrial, agricultural and service activities, while considering the establishment of an Arab-African institution to finance co-development, strengthen cooperation between central banks and build strong financial institutions to promote investment.

In addition, the Final Declaration stressed the importance of establishing a strategic partnership that would allow Arab-Asian countries to enjoy “preferential status” within the framework of the promising prospects offered by the African Continental Free Trade Area Agreement (ACFTA).

It called for encouraging the exchange of experiences and best practices in health, energy and food sovereignty in Africa and the Arab world, the goal being the emergence of an Arab-African cooperation that strengthens strategic security, “in light of the great global imbalance in supply chains and the emergence of new areas of conflict that threaten global supply routes.”

Aware of the dangerous impact of climate change on security and stability in the Arab and African regions, the Congress called for investing all means to resolve disputes related to water, energy and food resources through fruitful dialogue and peaceful mechanisms in order to safeguard common strategic security.

In this connection, it drew attention to the alarming exacerbation of climate change and its impact on migration and the emergence of the phenomenon of climate displacement, calling for accelerating the implementation of the “Marrakech Pact” for safe, orderly and regular migration.

The UAE delegation to the meeting was chaired by Saqr Ghobash, Speaker of the UAE Federal National Council (FNC).