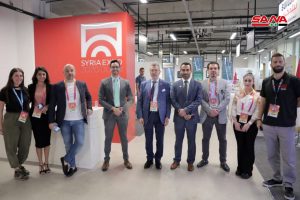 A delegation from the Arab-Brazilian Chamber of Commerce visited today the Syrian pavilion at the Expo 2020 Dubai.

The delegation, which included the Director of the International Office of the Arab-Brazilian Chamber of Commerce, Rafael Solimao, and the International Business Executive of the Chamber, Nuri Dowidri, toured the various sections of the pavilion, including the Commercial Partners Section, which hosts a group of Syrian companies, and was briefed on the economic and trade opportunities offered by these companies and opportunities for cooperation between the two countries. .

For his part, Ambassador Dr. Ghassan Abbas, Commissioner-General of the Syrian Pavilion at Expo 2020 Dubai, indicated that the Syrian participation in the exhibition is an opportunity to introduce the world to Syrian civilization and culture, economic opportunities in Syria and the most important productive sectors, including food industries, tourism, artistic production, health, infrastructure and others.

Ambassador Abbas pointed out that the visit of the delegation of the Arab-Brazilian Chamber of Commerce allows to learn about the various commercial and economic opportunities available to Syrian companies in Brazil, expressing his thanks to the delegation of the Chamber for inviting Syrian companies to participate in the Arab-Brazilian Forum, which will be held early next summer.

This visit comes within the framework of a wide international interest in the Syrian participation in “Expo 2020 Dubai”, as the pavilion witnessed the visit of a number of delegations from countries since the launch of the exhibition’s activities at the beginning of October 2021.