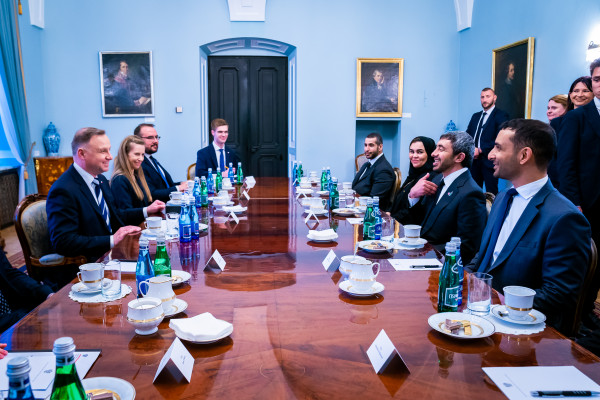 This came as the UAE’s Foreign Minister, who is currently visiting Poland, met with his Polish counterpart. The two sides reviewed the latest regional and global developments, including the situation in Ukraine and the global efforts to stabilise energy markets.

In a joint statement with his Polish counterpart, Sheikh Abdullah said, “The UAE values ​​the exceptional relations and close ties that unite our two nations, which include cooperation across various economic, political and cultural domains,” expressing his pleasure to be in Poland, a country with a long history and a prominent presence on the international scene.

He added, “The valuable participation of Poland in Expo 2020 Dubai was a clear example of this cooperation and reflects Poland’s cultural and economic capabilities and its ability to innovate and create. During my visit to the Polish pavilion, I enjoyed watching the ancient designs that emphasised Poland’s readiness to face emerging challenges and foresight the future.”

“During the current period in which the world, especially Europe, faces difficult and complex challenges, we appreciate Poland’s decisive role. This is evident through the country’s role in facing international issues by cooperating with neighbouring countries in dealing with the humanitarian crisis in Ukraine by welcoming millions of refugees with open arms and expanding social safety nets to meet their needs,” His Highness noted.

“We believe in the need to intensify efforts to mitigate the severity of crises, especially allowing humanitarian aid to reach those vulnerable without any hindrance. We also support Poland in expressing our concern about the high levels of hunger and food insecurity globally, which requires more international efforts to confront these common challenges, which is one of my top priorities.”

He elaborated, “We also welcome all mediation efforts made by the international community to bring together views and promote stability and peace in Europe and around the world. The UAE, as a current member of the Security Council, looks forward to continue working with member states to resolve the conflict peacefully and through diplomatic means, in line with the international law and the Charter of the United Nations.

“Our economic and trade partnerships reflect the common goals between our two countries. Last year, non-oil trade increased to about US$1.4 billion, which represents an increase of 10 percent compared to previous years. The UAE also received over 37,000 Polish tourists and signed new agreements aimed at expanding horizons for investment and economic cooperation.”

The UAE’s top diplomat stated, “We look forward to strengthening ties across all levels, especially renewable energy, health, education and technology, to achieve more prosperity and stability for our two peoples.”

“I thank Rau for the warm reception and exchanging views on issues of interest, and we look forward to meeting him in the UAE,” Sheikh Abdullah concluded.

He shed light on the UAE-Polish solid ties and their eagerness to boost them further.

The Polish Foreign Minister offered his condolences to Sheikh Abdullah on the passing of Sheikh Khalifa bin Zayed Al Nahyan.

He also lauded the UAE’s tremendous efforts to consolidate regional security and stability and maintain international peace and security, as well as its outstanding global humanitarian initiatives.

The meeting was attended by Eman Ahmed Al Salami, UAE Ambassador to Poland.