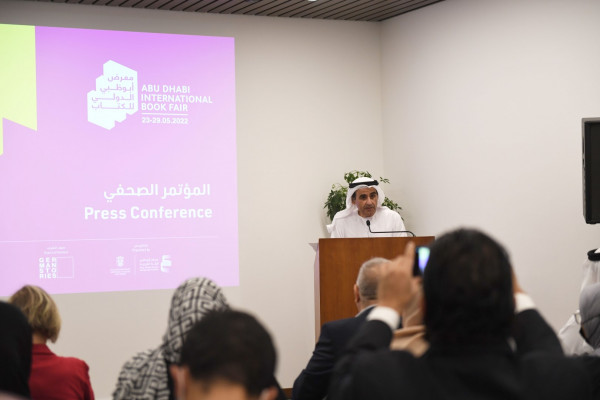 The 31st edition of ADIBF is bringing together more than 1,100 publishers from over 80 countries in over 450 diverse activities that cater to the audience’s aspirations, including panel discussions, seminars, literary and cultural evenings, the activities of the Professional Programme for Publishers, and activities designed for children – all presented by leading experts and academics.

Speaking at the conference, Dr. Bin Tamim said, “The Abu Dhabi International Book Fair is the embodiment of an exceptional vision set out by an exceptional leader – our Founding Father, the late Sheikh Zayed bin Sultan Al Nahyan – who believed that building and advancing a society begins with individuals committing to enhance their knowledge, master science, and hone their cultural and creative skills.”

“The Abu Dhabi International Book Fair was a turning point for the local cultural sector and for more than three decades, presented a prominent platform to introduce the world to our Arab and Emirati culture and civilisation. With this latest edition of the Fair, we remain committed to advancing the exhibition and supporting the publishing industry and those who work in it, and with that in mind, we are hosting experts, stakeholders, and publishers from around the world in the first edition of the International Congress of Arabic Publishing and Creative Industries, which is being held as part of ADIBF,” Bin Tamim revealed.

In his virtual speech, Juergen Boos, Director of the Frankfurt International Book Fair, underlined the importance of ADIBF, describing it as a heavy weight in the publishing industry, while mentioning that the fair’s hosting of Germany as a guest of honour embodies the strong cultural ties between the UAE and Germany.

For his part, Saeed Al Tunaiji detailed some of the major events and activities taking place at ADIBF this year. “The Abu Dhabi International Book Fair will remain a beacon of knowledge and creativity rallying creative minds around it. With that in mind, we developed an agenda for this year’s edition that reflects the reputable position the event occupies on the Arab and world stage,” he said.

The Louvre Abu Dhabi will be part of the fair this year, hosting a series of seminars and panel discussions that bring together some of the most prominent guests from ADIBF 2022, such as Syrian poet and critic Adonis; Guido Imbens, who was awarded one half of the 2021 Nobel Prize for Economics; Prof. Roger Allen, leading Western researcher in modern Arabic literature; Prof. Homi K. Bhabha, Professor of the Humanities and thought leader on colonial and post-colonial theory, Harvard University; Prof. Muhsin J. al-Musawi, Professor of Arabic and Comparative Literature at Columbia University in New York; and Brent Weeks, the New York Times bestselling author of eight fantasy novels, along with several world-renowned authors, thinkers, and cultural figures.

A series of art exhibitions are on the agenda in this year’s fair, most notably, a showcase by renowned Japanese calligrapher Fouad Honda that will shed light on the intersections between Arab and Japanese cultures through Arabic calligraphy. Visitors will also be able to enjoy a selection of panel discussions, as well as poetry, literary, and cultural evenings, which will bring together leading Arab, Emirati, and international intellectuals.

ADIBF 2022 will also host the inaugural International Congress of Arabic Publishing and Creative Industries – the first event of its kind in the Arab world, which will discuss the latest trends in publishing, and highlight the importance of digital publishing with a dedicated corner.

ADIBF is also organising an educational programme that will target students of different grades and age groups. The programme will engage students in a series of discussion panels and workshops, allowing them to explore inspiring models and academic best practices, which, in turn helps encourage them to enhance their own creativity, develop their intellectual potential, and expand their knowledge of various key topics. The sessions will broadcast live to schools and universities, and several events will be held at these academic institutions, including at New York University Abu Dhabi and Khalifa University.