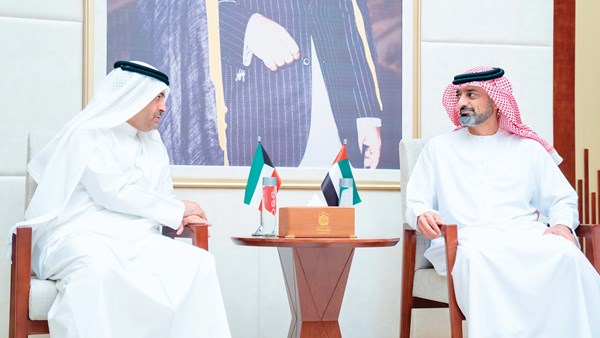 His Highness Sheikh Ammar bin Humaid Al Nuaimi, Crown Prince of Ajman, received at the Ruler’s Court yesterday Ali Salem Al Dhaidi, Kuwait’s Consul General to the State. His Highness welcomed the Consul and wished him success in carrying out his duties, which would help to strengthen the strategic relations between the two friendly countries in various fields. His Highness emphasized the depth of the fraternal relations between the United Arab Emirates and the State of Kuwait, which go back to a long history full of common attitudes and efforts, reflecting the strong ties between the two countries.
On his part, the Kuwaiti Consul General expressed his delight at meeting His Highness the Crown Prince of Ajman, praising the status and depth of bilateral relations and the civilized renaissance that the UAE in general and Ajman in particular is witnessing in all fields . The meeting was attended by His Excellency Sheikh Dr. Majid bin Saeed Al Nuaimi, Chairman of the Ruler’s Court of Ajman, and Youssef Muhammad Al Nuaimi, Director General of the Protocol and Hospitality Department.

UAE weather: Humid with a chance of rain; temperature to hit 43°C