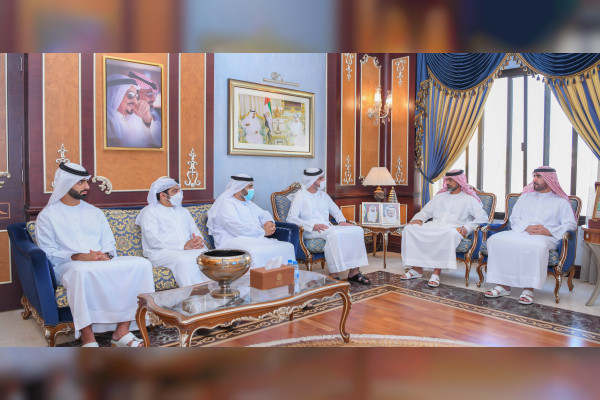 AJMAN, 9th March, 2022 (WAM) — H.H. Sheikh Ammar bin Humaid Al Nuaimi, Crown Prince of Ajman and Chairman of Ajman Executive Council, was briefed today about the programmes, strategy, goals and projects of the Ministry of Energy and Infrastructure (MoEI) for the next 50 years, in line with the UAE Government’s vision, and the ministry’s action plans for the emirate.

Sheikh Ammar was briefed in his office by a delegation from the ministry, led by Sharif Al Olama, Under-Secretary for Energy and Petroleum Affairs at the Ministry.

Sheikh Ammar was also briefed about the ministry’s plans and projects to implement the latest energy and water rationalisation standards, by launching initiatives that support the economy and reinforce sustainability, in addition to the major technological development witnessed by the ministry in all areas of energy.

During the meeting, Sheikh Ammar highlighted the importance of leveraging technologies to advance the energy sector, upgrade infrastructure and implement the latest energy and water rationalisation standards, which would help achieve the country’s development goals, ensure economic growth, and continue the process of national development.

He also stressed the need to use clean and renewable energy, which would reduce the effects of global warming and is known for its stable prices, among other benefits.

Al Olama expressed his happiness at meeting Sheikh Ammar and thanked him for his directives, which would motivate those concerned to work harder and with devotion.

The meeting was attended by a number of officials.