Allu Arjun fans on streets with We Want Pushpa-2 banner 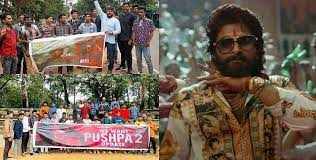 Allu Arjun fans on the streets with a banner saying We Want Pushpa-2. Allu Arjun film Pushpa was released saying that there will be a second part. It was reported that the shooting of Pushpa 2 will start soon. But with no update from the makers of the film, the fans took to the streets with the banner. Pictures of fans gathering with banners have surfaced in Maharashtra, UAE and Pathanamthitta. The pictures are now viral on social media.

Pushpa: The Rise achieved record collections on its first day of release. The makers have announced that the second part will be a continuation of the first part.