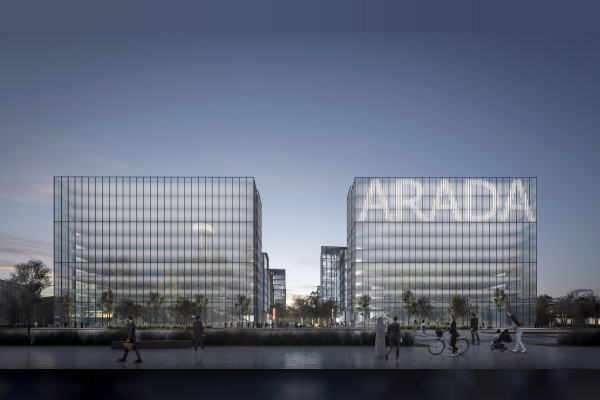 SHARJAH, 26th September, 2022 (WAM) — Arada has announced the launch of Arada Central Business District (CBD), a new commercial centre for Sharjah, which will be located at the heart of Aljada community.

Spread over 4.3 million square feet of prime leasable space located in 40 smart office blocks, Arada CBD has the capacity to accommodate 20,000 workers, fulfilling the substantial demand for a contemporary business district in Sharjah and catering to the needs of the future workplace for companies across the UAE and beyond.

H.H. Sheikh Sultan bin Ahmed bin Sultan Al Qasimi, Chairman of Arada, said, “Arada CBD is aligned with Sharjah’s vision to position itself as a leading business hub, attracting companies of all sizes and talents from across the UAE and beyond. The launch of Arada CBD fulfils our promise to provide a transformational urban experience where residents can work, live and play.”

Prince Khaled bin Alwaleed bin Talal, Vice Chairman of Arada, said, “Arada CBD takes the best features from the most prominent business parks from around the world and combines them in a perfectly designed location that is specifically geared to support the workforce of tomorrow.”

The region’s first business park to be conceptualised after the pandemic, Arada CBD is defined by contemporary urban architecture that has been designed to inspire staff and enhance their productivity. Flexible and wide, open floor plans enhance collaboration and benefit from floor-to-ceiling windows allowing more natural light, while each office also benefits from smart technology that is part of Aljada’s overall smart city programme, which will use next-generation solutions that are linked to everything from waste and traffic management to the circular economy and smart lighting solutions.

Ahmed Alkhoshaibi, Group CEO of Arada, said, “We are confident Arada CBD will unlock growth opportunities for companies in Sharjah and will encourage corporates and SMEs to expand and relocate to the Emirate, consequently redefining the business scene in the Emirate and enhancing its position on the regional investment map. We have just begun the process of offering guided tours to all corporates interested in leasing space in Arada CBD and expect to see healthy demand for this exceptional new addition to Arada’s growing portfolio.”

The launch of Arada CBD complements the ongoing growth of the Sharjah economy, which is projected to grow at 5% annually for the medium term, according to Oxford Economics. One of the most vibrant and diverse economies in the region, with 96% of GDP derived from non-oil sectors, the Emirate also attracted AED808 million in foreign direct investment (FDI) in 2021.

Sharjah was recently named by New World Wealth as the world’s second-fastest growing city for millionaires in the first half of 2022, reflecting several successive years of record government spending, a robust response to the pandemic by local authorities, and steady growth in new businesses registered. The Emirate is already recognised as a cultural and educational capital for the region, with around AED5.5 billion invested annually in education and R&D, while local authorities have identified several high-potential growth sectors of the future, including mobility, logistics and advanced manufacturing.

According to JLL, office space demand growth in Sharjah is projected to grow by 5% over the medium term due to improved confidence in the business sector as well lucrative business incentives from the government.

Arada is moving its headquarters to the first building of Arada CBD, introducing a dynamic new workplace for its growing workforce spread over seven levels. The Arada headquarters building reflects the master developer’s vision for the workplace of tomorrow, with a striking design aesthetic and impressive list of amenities, including an in-house gym, cafeteria and nursery.

By the time the first cluster of Arada CBD is ready in the first half of 2025, there will already be a population of 20,000 living within the Aljada community.

Spread over a 24 million square foot area, Aljada is Sharjah’s largest ever project and a transformational destination for the Emirate. Aljada contains numerous residential districts, as well as extensive retail, hospitality, entertainment, sporting, educational, healthcare components and Arada CBD, all set within a green urban master plan. So far, Arada has completed almost 1,500 homes at Aljada, with another 6,000 currently under construction.

Cameroon is a promising country with great potential for investment in prospective...