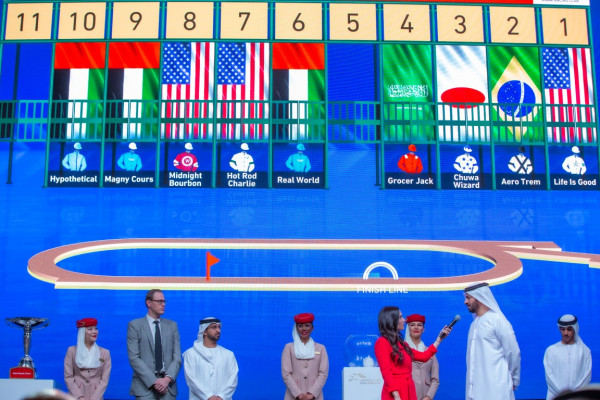 DUBAI, 22nd March, 2022 (WAM) — With the spectacular Burj Khalifa as their backdrop, 69 blue-blooded two-year-old galloped on Tuesday morning as the inaugural Dubai Breeze-up Sale got underway.

Meydan Racecourse’s Tapeta training track was the venue for the breeze which began at 7:45am and was completed two hours later without a hitch. Henry Beeby, Group Chief Executive of organisers Goffs, took to the microphone to commentate on the action which took place in front of several hundred onlookers.

Tom Taaffe, International Consultant for Goffs, was pleased with the breeze, commenting: “We are delighted with how smoothly it all went and that is down to the organization of Dubai Racing Club and the cooperation of all the consignors,” he said. “The ethos of the sale was for the horses not to be pushed out and timed, but just to be asked to gallop two furlongs so people can see their action and then inspect them up close later in the stable yard.

“The consignors are all delighted at how well their horses galloped and a number of buyers have mentioned to me that it was nice to see them move them like that, without being pushed.”

With the progeny of leading stallions such as Into Mischief, Dubawi, Frankel, Night Of Thunder, American Pharoah, Showcasing, Exceed And Excel, Justify and Arrogate among the lots on offer, bidding is expected to be strong when the sale takes place at 5pm on Wednesday in the Meydan Racecourse Parade Ring.