Cabinet will always be supportive team for UAE President in consolidating foundations of the Union, empowering its institutions: Mohammed bin Rashid 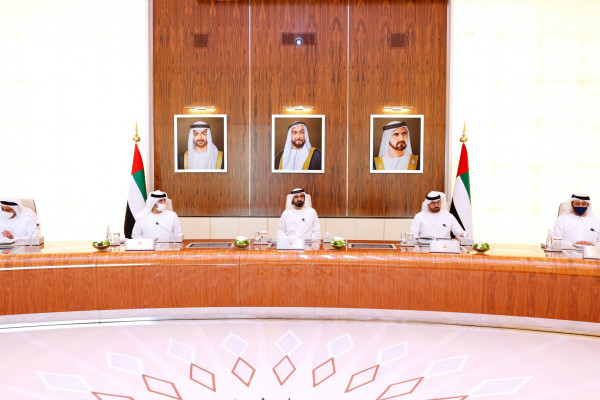 Sheikh Mohammed added that the vision of the UAE President in building the national human capital, consolidating the economy and enhancing the international and political position of the UAE, will form a road map for all ministries and federal institutions during the coming period.

“We confirm that the vision of the UAE President will form the road map for all strategies and projects of all ministries and federal institutions.. His Highness reign started by field work, directing his first projects and initiatives to the well-being and happiness of the people.

“We confirm the continuity of our efforts and we ask all ministries and federal institutions to raise their suggestions and plans to the Cabinet within the coming 50 days.

“The Cabinet will always be a supportive team for the UAE President in his mission in consolidating the foundations of the Union, empowering its institutions, developing its path and enhancing the quality of life,” His Highness Sheikh Mohammed bin Rashid Al Maktoum concluded.

Also, the Cabinet affirmed consolidating efforts to focus on community needs and building capable national cadres, strenghen its international position, and develop its legislative and technological infrastructure to achieve the UAE vision and goals. The pillars emphasise the Cabinet’s keenness to strenghen the spirit of the Union, and to work continuously to develop the union journey and improve people’s life.

The UAE Cabinet adopted a number of environment and health related policies and legislations including the reformation of the Education and Human Resources Council, chaired by H.H. Sheikh Abdullah bin Zayed Al Nahyan, Minister of Foreign Affairs and International Cooperation.

The Cabinet meeting saw the approval of the reformation of the Higher Committee for People of Determination Services, chaired by the Minister of Community Development for a period of three years, renewable, and appointed Dr. Abdulrahman bin Abdul Manan Al Awar as the Chairman of the Board of Trustees of the Higher Colleges of Technology HCT.

In addition to reviewing and discussing a number of reports, and approving international agreements with friendly countries, the Cabinet approved a policy for Federal Government Revenues by commercial banks working in the UAE, and adopted a new decision regulating the issuance of “other categories of shares”.