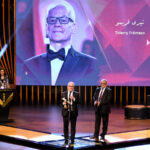 The event will screen award-winning films at the Cairo Opera House.

Submissions for the program will be open from May 15 to Aug. 15.

Renowned actor and festival president Hussein Fahmi said in a statement that “preparations for the festival have started already and we are hoping to achieve an edition worthy of the festival legacy.”

Amir Ramses, the festival director, said: “We have already started to watch, invite and follow up on the expected important films of the year along with the programming team.”

Last year, 98 films from 63 countries participated at the 43rd edition of the festival. There were 27 world premieres, seven international premieres, 44 Middle East and North Africa premieres and 15 Arab premieres.

The event sold more than 40,000 tickets in 2021 witnessing a significant increase in numbers from the previous editions due to the COVID-19 pandemic.

UAE citizens to be exempt from UK entry visa