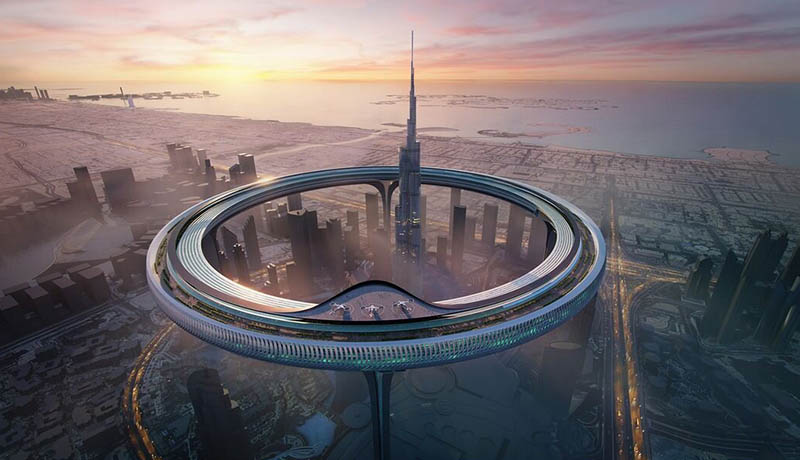 Defying the standard norms of architecture, Znera Space, an architecture firm, has produced a revolutionary concept that will re-imagine the Dubai Skyline.

Being called the Downtown Circle, it is a 550-metre long ring that surrounds. Designers intend the project to be sustainable and self-sufficient and expect it will break up the traditional ideas of gated communities and skyscraper homes.

Najmus Chowdry and Nils Remess, co-founders of Znera Space, who frequently focus on experimental architecture that explores and challenges social limits and environmental issues, have designed the enormous project. They created the project during the Covid-19 pandemic which piqued them to question the way people live in cities, especially in skyscrapers.

The illustration of the project shows how the structure will encircle all of Downtown Dubai in a circumference of 3 km. It will be divided into smaller parts, each of which will have residences as well as areas for public, commercial, and cultural use.

The Downtown Circle is designed to have 5 floors and sit on five points or pillars, which will be buried in the ground. The enormous span of the circle would be made up of two primary rings that would be joined vertically by a continuous green space called the Skypark to form a connected three-dimensional urban green eco-system.

The Skypark would serve as the lung of the building which would have swamps, waterfalls, tropical vegetation, and other floras. The design will also consist of areas for rainwater harvesting, solar power and a system storing carbon and filtering pollutants from the air.

The concept of Downtown Circle also has a proposition of a tram-like transport system on the outer perimeter ring. With around twenty large pods which would be travelling up to 100 km/h, it would move passengers around the structure and also offer a 360-degree view of the city.