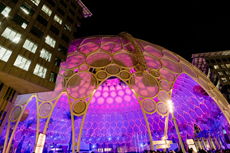 After over seven years of planning and preparation, Dubai’s Expo 2020 opened its doors to millions of visitors from around the world from October 2021 until March 2022. System integrator Creative Technology Middle East (CTME) were awarded the contract to deliver the AV system in the Al Wasl Plaza dome. CTME chose disguise to power the 360Â° immersive projection, while engaging workflow specialists Bild Studios to build the advanced content workflows that allowed artists to create the stunning visuals to excite the record breaking crowd.

In a massive 4.3 square mile plot in Dubai South, near Al Maktoum International Airport, Dubai Expo had 192 countries contributing towards a part of the exhibit — each with their own independently designed pavilion. The Expo featured breathtaking exhibitions and 60 daily live shows complete with interactive technology and dazzling performances. The permanent works of art were set out within three themed districts: Mobility, Sustainability, and Opportunity — all celebrating globalization and the international community.

“As the Official Projection and Display Partner for Expo 2020 Dubai, Christie’s had the opportunity to work closely with its partners to bring Expo’s vision for the dome and several pavilions to life. We are honoured to have taken part in such a monumental and memorial event,” says EMEA director of sales, entertainment at Christie, Joe Graziano.

“We are very proud of our AV System Integration delivery at the Al Wasl Dome. We were confident using disguise as their platform seamlessly delivered the vision of Expo 2020 and allowed the content creators to produce the stunning content which makes the 360-degree immersive visuals an unforgettable experience for all visitors. The entire journey has been incredible, and we thank our partners at disguise for coming on this amazing journey with CT, not only on Al Wasl but on our other pavilions — USA, DP World, ENOC as well as the live Jubilee and the DMA stages making this an unforgettable experience for CT too!” explains managing director of CTME Andy Reardon.

Bild used their extensive knowledge of disguise, real-time workflows, video engineering, and creative design to deliver the advanced content pipeline used daily in the Al Wasl dome. They created a system that merged 2D and 3D content workflows and split the 27K x 6K canvas into 11 regions. Each region represented a video file which was played back by a corresponding disguise gx 2 Actor server.

“As all servers played in perfect synchronisation, the regions blended together into one gigantic and seamless canvas. It was an extraordinary moment when we saw the Al Wasl projection canvas coming together as one joint surface for the first time,” explains Bild Studios co-founder David Bajt.

As the epicenter of the Expo, besides the projections, the dome had various elements coming together to form a spectacle, some of which include mapped LED pixels on the Plaza’s architecture delivered by SACO Technologies. They worked in collaboration with Bild Studios who created a workflow that auto-mapped the projection content onto the LED pixels. The mapped pixels were made up of 2620 SACO V-Pix LED fixtures, integrated into the dome structure and powered by a disguise solo server. The solo server was integrated with the gx2 servers to make the projection and LED pixel work as one canvas.

“We worked in close collaboration with Creative Technologies and Bild Studios to elaborate a workflow to have our LED pixels included in the video projection content and powered by disguise. Commissioning and integration have been successfully done remotely with our local partner 3S Lighting, who managed the installation phase,” explains Benoit Soucy, video integrator lead at SACO.

Various elements such as waterfalls and butterflies were layered onto the performance to be viewed by those watching at home as well as attending VIPs viewing the performance through screens. Bild Studios supported Five Currents using six disguise vx 2 servers, eight rx II render nodes and two disguise fabric pre-configured network switches in their system to deliver the real-time augmented reality content created in Unreal Engine.

Five Currents technical director Nick Eltis was impressed at what the team were able to achieve:

“For the opening ceremony, we had to deliver augmented reality for six cameras, rendering real-time in 4K at 50 frames. Throughout the process, the knowledge of the Bild team and the power of disguise technology was invaluable — so much so that we asked the team back for our Closing Ceremony.”

According to Bajt, “AR, just like xR and virtual production, represents an incredibly integrated environment where the dependency level between technology and human beings is immensely high. We essentially operated the world’s largest virtual production shoot, using six tracked cameras, live, for millions of live viewers.

The team at Bild deployed disguise systems to deliver these elements for both the Opening and Closing Ceremony at Expo with the Closing ceremony on March 31 this year.

According to Bajt, “for the opening ceremony we worked with Unreal Engine and used disguise rx and vx 2 servers to achieve photoreal content, which was more inline with Five Currents creative ambitions. For the closing ceremony, our workflow included Notch and disguise gx 2 servers which allowed us to be incredibly agile and make changes in real-time during rehearsals, which was imperative for the limited timeframe we had before the dome was open to the public.”

If visitors had a taste for real-time content, live experience creators Artists In Motion (AIM) with the support of Australian-based agency S1T2, delivered an interactive experience named ‘Become a Guardian of Al Wasl’, where visitors can have their photo taken in a booth and then, within seconds, see their photo entwined into the content being projected out onto the dome in real-time. Four disguise rx II rendering units powered this unique experience. To support AIM and S1T2, disguise and Bild Studios provided consultation for integrating the rx servers into the installed gx2 server system responsible for the Al Wasl projection.

“The robustness of the rx units to synchronise the real-time application straight onto the dome proved the difference in being able to deliver such an ambitious idea. Together with the flexibility to interconnect live data from the booths and control of audio & lighting brought the whole experience together,” explains AIM technical director, Hai Tran.

Beyond the Al Wasl dome, disguise’s powerful hardware solutions for content rendering and compositing, coupled with its Designer content pre-visualisation and mapping software is used by a range of disguise partners on various elements of the exhibit. This includes many of the Expo pavilions representing the countries of the world such as the UK, US, Russia, Belgium, China, and Hungary pavilions, as well as the MasterCard pavilion, the ENOC pavilion, the Jubilee stage and the DMA stage.

“Working on the ground in Dubai and seeing these spectacular visions come to life has been incredibly rewarding. Expo 2020 is a testament to what we can achieve when we combine leading technology and technical skill with an ambitious creative vision. At disguise we want to empower our community of certified partners and users to create the impossible. What we have seen at Expo is a huge testament to that,” says disguise technical solutions manager, Peter Kirkup.