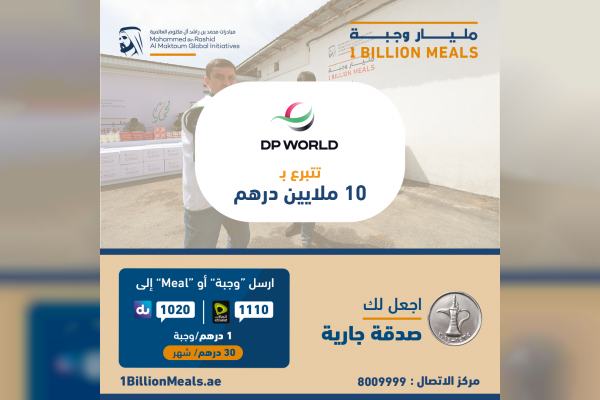 DUBAI, 21st April, 2022 (WAM) — DP World has announced a donation of AED10 million to the ‘1 Billion Meals’ initiative, the largest of its kind in the region, which aims to assist and provide sustainable food support to the underprivileged and most needy groups in 50 countries in the Middle East, North Africa and the world.

DP World’s donation, equivalent to 10 million meals, is one of several UAE companies that are making a significant financial contribution to ‘1 Billion Meals’ initiative, which is helping to alleviate the hunger worldwide. It’s a significant addition to the 76 million meals collected within just six days of the launch of the initiative by His Highness Sheikh Mohammed bin Rashid Al Maktoum, Vice President, Prime Minister and Ruler of Dubai.

Sultan Ahmed Bin Sulayem, DP World Chairman and CEO, said, “DP World has always been committed to supporting humanitarian causes in the countries where it operates. We recently launched the DP World Foundation to support humanitarian work and facilitate initiatives financed by the public and private sectors.”

“The ‘1 Billion Meals’ campaign organised under the directive of His Highness Sheikh Mohammed bin Rashid Al Maktoum, reflects the UAE’s desire to provide humanitarian support directly to those who need it most. The initiative will cooperate with regional and international organisations, such as WFP and UNHCR, to facilitate its logistical operations to provide food aid to those in need across 50 countries. We at DP World are proud to contribute to meeting the challenge of hunger. This will send one billion messages of humanitarian solidarity from the UAE to the world,” Bin Sulayem added.