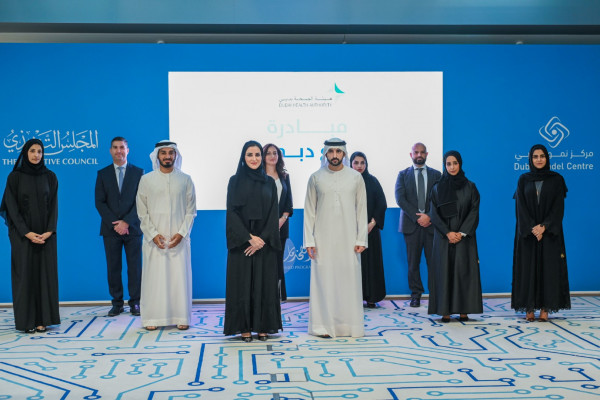 DHA was announced as a winner at the Hamdan Hub 2021, organised by the Dubai Model Centre, affiliated with the General Secretariat of Dubai Executive Council.

Congratulating the DHA, Sheikh Hamdan said, “We congratulate the Dubai Health Authority for winning the Hamdan Flag. It is a well-deserved recognition for the Authority’s continued efforts to improve and innovate its services. Dubai is a role model in providing creative, innovative and high-quality government services in line with the directives of His Highness Sheikh Mohammed bin Rashid. Our future vision is driven by the competencies of our teams whose exemplary commitment to improving public services contributes significantly to making Dubai a global benchmark for service innovation. I express my sincere gratitude and appreciation to the participating entities, who continue to provide services that ease people’s lives.”

Abdulla Mohammed Al Basti, Secretary-General of Dubai Executive Council, said, “Since its launch 12 years ago, the Dubai Model Centre has made qualitative progress in government services. This was achieved through the implementation of the vision of His Highness Sheikh Mohammed bin Rashid Al Maktoum and the directives of H.H. Sheikh Hamdan bin Mohammed bin Rashid Al Maktoum which emphasises raising service efficiency and enhancing customer-centricity.”

Eman Al Suwaidi, Senior Director of Dubai Model Centre, said, “Our congratulations to the Dubai Health Authority for receiving the Flag of Hamdan bin Mohammed Programme for Government Services for 2021. We also extend our gratitude and appreciation to all participating government entities, whose continuous improvement raised the efficiency of government services in Dubai.”

The Dubai Health Shield initiative introduced by DHA was voted the best government initiative by the public and a jury of 17 experts across 11 countries. Nine initiatives were shortlisted out of which 26 reached the final stage of the competition.

DHA will now fly the flag of the Hamdan bin Mohammed Programme for Government outside its headquarters for one year, until the next edition of the programme.

The winning initiative was selected based on criteria that measured the efficiency, effectiveness, sustainability and commitment to the government’s pioneering approach.

This is part of the Dubai Model Centre’s efforts to enhance the level of government services in Dubai, and take it to unprecedented levels, as part of the goal of making the Emirate one of the best in the world.